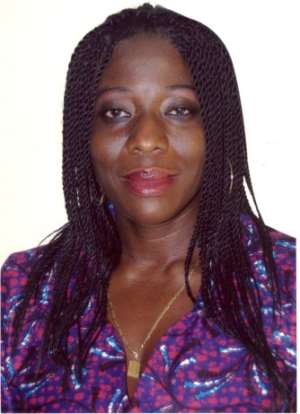 The Kintampo Waterfalls in the Kintampo North Municipality of Brong-Ahafo Region attracts 30,000 tourists annually, Mrs. Catherine Abelema Afeku, the Minister of Tourism, Arts and Culture stated at the weekend.

Mrs. Afeku was speaking at a colourful durbar organised by the Ghana Tourism Authority (GTA) with support of the Kintampo North Municipal Assembly (KNMA) to mark the re-opening of the Waterfalls at Kintampo.

The Vice President and the entourage went to the place because of a disaster caused by falling trees at the first stage of the waterfalls due to strong winds and rainstorms that resulted in the tragic death of 18 students the previous day.

Majority of them were from the Wenchi Methodist Senior High School and the rest from the University of Energy and Natural Resources in Sunyani.

Mrs Afeku did not however, disclose the annual revenue generation of the Waterfalls but announced that because of the patronage by both local and international tourists, a memorandum of understanding would be signed by stakeholders - the Tourism Ministry, the GTA, the KNMA and the chiefs on behalf of the people of Kintampo.

The tourism Minister said that would ensure efficiency in the management of the facility for increased revenue and judicious use of it for the mutual benefit of the Municipality and the nation in general.

She added though revenue had been lost since the closure as a result of the disaster, the quality of the rehabilitation had become a benchmark for all tourist attraction sites that required re-development to attain modern standards.

Mr. Akwasi Agyemang, the Chief Executive Officer (CEO) of the GTA assured that high health and safety measures and standards had been put in place to guarantee the safety of tourists and visitors to the place.

Mr Agyemang said about GH¢ 500,000,00 rehabilitated waterfalls was expected to provide direct jobs to about 50 people and more than that figure for indirect employment.

Mr Michael Sarkodie Baffoe, the Municipal Chief Executive (MCE) for Kintampo North in a welcoming address bemoaned that the Municipality was bedeviled with several security challenges that was draining the resources of the Assembly.

He therefore appealed for the establishment of a military base at Kintampo to augment the efforts of the Police to ensure effective security for the people to live in peace to promote business and other developmental activities in the area.

Nana Effah Guakro, chief of Kyeremankoma in Kintampo, on behalf of the chiefs and people in the Municipality commended the government, particularly the Vice President for the fulfillment of the promise to rehabilitate the waterfalls.

He appealed to the government to complete the resurfacing of the Kintampo town roads and added that the deplorable state of the feeder road linking Kintampo and Abaase in the Pru District also needed immediate rehabilitation to boost business and other social services to facilitate speedy economic growth in the Municipality and Pru District.

'Captain Smart arrest is intolerance, he did no wrong' – Med...
47 minutes ago