Burundi opposition to boycott new round of talks: UN 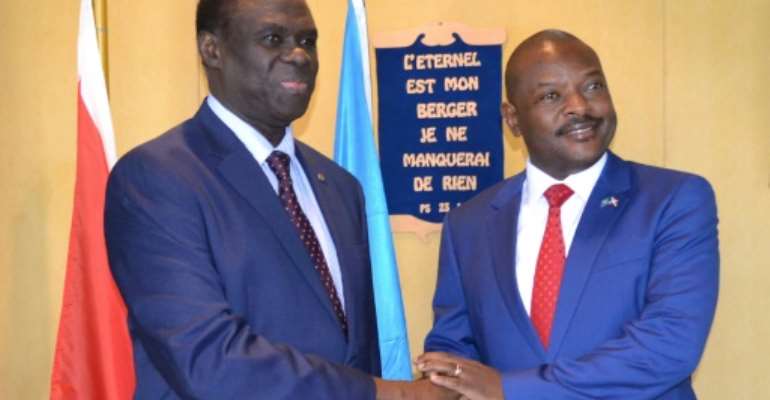 UN envoy to Burundi Michel Kafondo (L) shakes hands with Burundi's President Pierre Nkurunziza ahead of a meeting in June 2017. By STR (AFP/File)

A new round of talks aimed at ending the political crisis in Burundi will open later this month in Tanzania, but the main opposition alliance will not take part, the UN envoy said Monday.

The meeting will bring together President Pierre Nkurunziza's government and opposition representatives in Arusha from November 27 to December 8.

East African leaders will then meet in January to assess the outcome of the talks in Arusha, he said.

Burundi was thrown into a political crisis in April 2015 when Nkurunziza decided to run for a third term that his opponents said was unconstitutional.

Last month, the CNARED reacted with dismay when the government approved changes to the constitution that would pave the way for 14 more years of power for Nkurunziza.

In power since 2005, Nkurunziza was selected by parliament and went on to win elections in 2010 and was re-elected in 2015.

"The Burundian authorities are already preparing the next elections even if there has not yet been a fair solution to the issue of an inclusive dialogue," said Kafando.