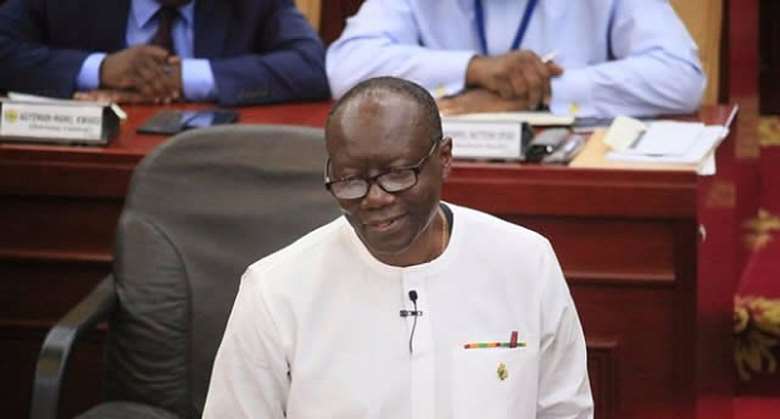 Government's total expenditure, including provision made for the clearance of arrears for 2018, is estimated at GH¢62 billion.

Equivalent to 25.7 percent of GDP, the estimated expenditure for the year represents an annual growth of 14.5 percent.

Finance Minister Ken Ofori Atta, who announced this, said compensation of employees, which continued to represent the single largest item of government expenditure, was estimated at GH¢19.6 billion (8.1 percent of GDP), adding that of the amount, GH¢16.8 billion, equivalent to 6.9 percent of GDP, had been provisioned for wages and salaries alone.

“Expenditure on goods and services is estimated at GH¢3.5 billion, representing 1.5 percent of GDP. The annual growth of 56.9 percent reflects a full provision made to cater for the government's priority programmes, including the flagship Free SHS policy, which enters its second year of implementation in 2018.”

Also, he said the country's debt reprofiling exercise was having a positive impact on interest payments.

“Interest payments are estimated at GH¢14.9 billion (6.2 percent of GDP). Of this amount, Domestic Interest Payment constitutes about 82 percent. As we consolidate our public finances, the annual growth of domestic interest payments is expected to decline considerably.”

Touching on transfers to Statutory Funds, as well as all other earmarked funds, which were backed by the relevant Laws, he said these were estimated at GH¢12.1 billion.

“The object of the Statutory Funds is to provide secure funding to implement critical programs and projects in the relevant sectors. Over the years, these sectors have been exerting a lot of pressure on the limited available resources despite allocations to the Statutory Funds. In consonance with the PFM Act, 2016 (Act 921), and Earmarked Funds Capping and Realignment Act, the earmarked funds will be realigned to national priorities.”

“Of this amount, domestically financed Capital Expenditure is estimated at GH¢3.3 billion or 1.4 percent of GDP. This represents an annual growth of about 219 percent. An amount of GH¢3.6 billion has been budgeted from foreign financed capital expenditure and this will be funded by a combination of donor project grants and project loans.”