'This is a great day': Zimbabweans revel in Mugabe's ruin 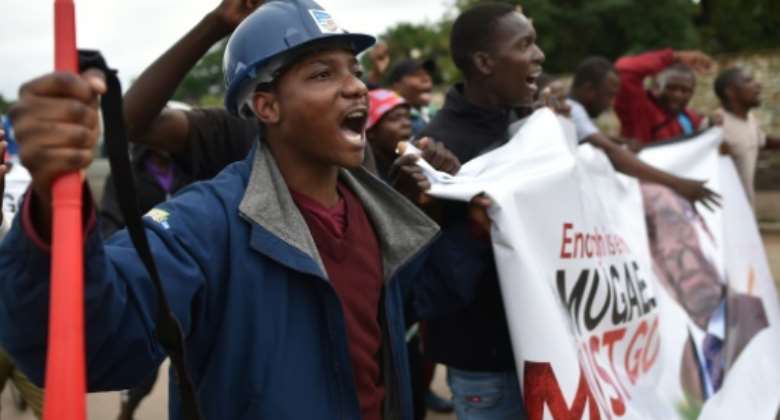 People called for Zimbabwe's president Robert Mugabe to step down during a demonstration in Harare. By - (AFP)

President Robert Mugabe clings to office, the military is in power and the much-feared ZANU-PF party still rules -- but Zimbabweans put such issues aside Saturday to happily embrace what they hope is a new era for the country.

Many protesters welcomed the army's takeover this week that has brought 93-year-old Mugabe's previously impregnable reign to the brink of collapse.

"Just look at the crowds here... Finally we can hope to have jobs when I finish university," Tafadzwa Musarurwa, a 22-year-old social studies student at the University of Zimbabwe, who marched in the central business district, told AFP.

As a carnival atmosphere spread through the city, demonstrators swigged from beer bottles and danced in the road demanding that Mugabe accept defeat and step down.

Some laughing protesters played a song by popular local musician Oliver Mtukudzi with the lyrics: "You should accept that you are old. You are old, don't deny that."

Mugabe is the only ruler that Zimbabwe has known since independence from Britain in 1980, overseeing decades of state brutality, election rigging, corruption and economic collapse.

The country's future is uncertain, but the sudden and unexpected humiliation of a once-omnipotent leader was greeted with stunned delight.

"This is a great day for us," said Sonia Kandemiri, a veteran from Zimbabwe's independence struggle. "For 37 years we have had nothing to show for participating in the liberation war, while his family were living it large."

A key trigger for the military's dramatic intervention was Mugabe's efforts to position his extravagant wife Grace as his successor -- which prompted the army to finally turn against him.

"I am so happy people from all different walks of life and political affiliations have come together today to express their grievances in unison," said Remigio Chiguware, 41, a businessman.

"For a long time, no one was listening. National interests were not being served. That is how we got to this situation."

Until last week, even small anti-government protests had been met for decades with tear gas, rubber bullets and baton-wielding security forces.

But the military said it backed Saturday's marches, which were peaceful.

"We are happy our soldiers stood with us, the people. They must finish the good job to make sure Mugabe goes. We have been suffering," one marcher, Baliwe Sibanda, said.

"We are so happy they freed us from the Mugabe dynasty."

Nearby a group of young men tore down a green metal street sign bearing Robert Mugabe's name and smashed it repeatedly on the road before trampling it under foot.

Others held up a framed portrait of Mugabe with his face crossed out in thick black ink.

The demonstrations appeared to have united Zimbabwe's ethnic groups, with white and Indian-origin Zimbabweans joining members of the country's Shona and Ndebele communities on the streets.

"I am glad that Mugabe is going during my lifetime. He is the source of every problem in our beautiful country," said Irene Douglas, 67, a former farmer whose land was confiscated during Mugabe's ruinous farm seizures.

Several past members of Mugabe's government including former vice president Joice Mujuru and ex-finance minister Patrick Chinamasa, who both fell out with the regime, attended the protest and were greeted with applause.

Morris Craig, a 49-year-old computer programmer who like many others brandished the Zimbabwean flag, said it was "good people are here".

"The suffering of the people must end," he said.