US says people of Zimbabwe must choose own government 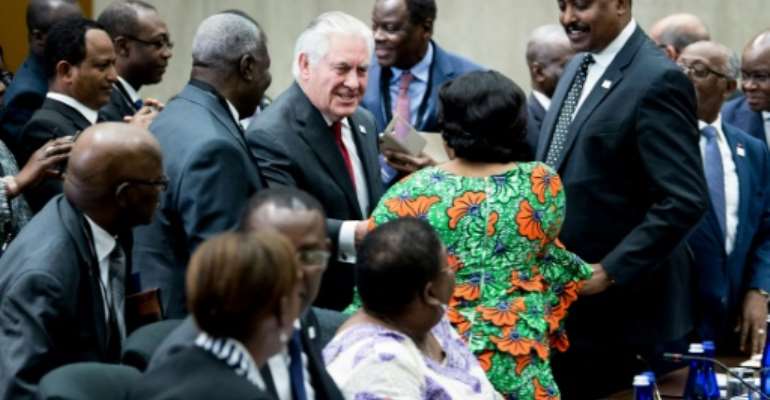 US Secretary of State Rex Tillerson greets participants during a meeting of African leaders at the State Department on November 17, 2017. By Brendan Smialowski (AFP)

US Secretary of State Rex Tillerson said Friday that the people of Zimbabwe must be allowed to choose their own government through democratic elections, after the military took power.

"We all should work together for a quick return to a civilian rule in that country in accordance with their constitution," he said, ahead of talks with African foreign ministers.

Earlier in the day, Zimbabwe's President Robert Mugabe made a defiant appearance at a university graduation, but power in Harare has clearly shifted into the hands of the army.

Washington was no friend of Mugabe, who has ruled Zimbabwe for the entire 37 years of its independence, but is also reluctant to defend what appears to most observers as a military coup.

The African Union, which has taken a strict line on some other recent military takeovers, has in this case left the matter in the hands of the South African-led SADC regional bloc.

The top US envoy, who said he plans to visit the continent early next year, urged his guests to see the crisis as a chance to push Zimbabwe into meaningful reform.

"Zimbabwe has an opportunity to set itself on a new path, one that must include democratic elections and respect for human rights," he told the ministers.

"Ultimately, the people of Zimbabwe must choose their government," he insisted, calling on his guests to "discuss concrete ways that we can help them through this transition."