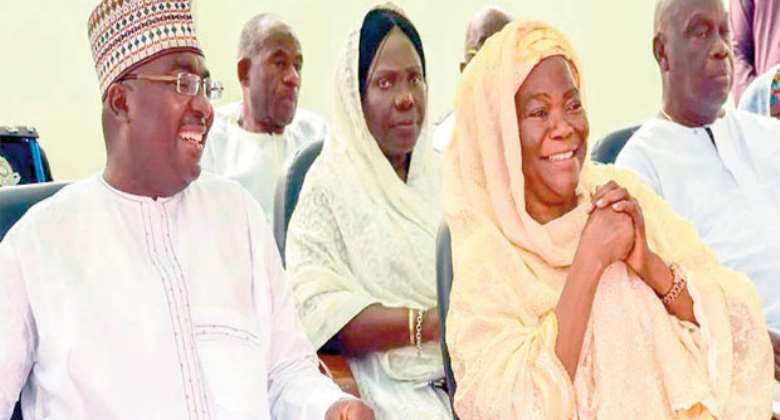 “The late former Vice President Aliu Mahama did not only play a key role in my choice by Nana Akufo-Addo as his running mate, but offered me important lessons in politics and joined in the campaign that followed,” so said Dr. Mahamudu Bawumia, current vice president.

The vice president was speaking during the Islamic prayer segment of the fifth anniversary of the death of Aliu Mahama at his Cantonments residence in Accra yesterday.

His remarks were genteel and held his audience spellbound as he recalled his early days in politics. Alhaji Aliu Mahama, Dr Bawumia recalled, was unflinching in his support for him when the then flag bearer, Nana Akufo-Addo, was considering him for the position of running mate.

According to him, the former veep told him that he was going to hold his hands and lead him into politics at a time when he (Dr. Bawumia) was a novice.

“Whenever he smiled, as he often did, it was comforting,” Dr Bawumia said, adding that he learnt a lot of things about leadership from the deceased. “He told me about how when you are in leadership position many persons would come and tell you about others. 'You must be careful about such developments otherwise you would part ways with many people. In politics avoid rumours.' He told me to be loyal to my boss,” he recalled.

Dr Bawumia continued, “I am gladdened by the fact that today as we assemble here to pray for our father, people from both sides of the political divide are here. That shows that our father lived a good life. I have a deep affection for him. He was a selfless person and that was the essence of Alhaji Aliu Mahama. He was always smiling and when he did, it was comforting.”

Recalling the period before his choice as running mate to Nana Akufo-Addo, he said, “When Nana Akufo-Addo was considering me as his running mate, I was a novice. He had to do consultations and I know that one of the persons he consulted was Alhaji Aliu Mahama. He was unflinching in his support.”

The late Aliu Mahama, he said, was a pioneer because as vice president to President Kufuor, “He brought something unique. He was the first politician who could say he was from both the Zongo and the North. When I was selected he knew I was a novice and said, 'I would hold your hands.' It was not just about advice, but he went round campaigning with me.”

Dr. Bawumia said he was fascinated by the deference the former vice president commanded from the many chiefs they met during the campaign – something which he said made him advise him (Bawumia) to write an autobiography.

Dr. Bawumia observed how Aliu Mahama was instrumental in erasing the perception that the New Patriotic Party (NPP) as a political grouping, was anti-Zongo.

“For him, we see him as a pioneer as far as our politics is concerned because he as vice president to His Excellency President Kufuor, he brought something unique to the table. He straddled the Zongo community and the Northern Community.”

He revealed that the whole idea of setting up a Zongo Development Fund was that of Aliu Mahama's.

While tracing the story of how matters of the Zongos became centre stage in the NPP, he said that one day while in a conversation with former Vice President Alhaji Aliu Mahama, the latter said something must be done for the Zongo communities, especially since there was a perception that the NPP was anti-Zongo. When the issue was brought before Nana Akufo-Addo, he bought into the idea hence, the inclusion of Zongos in the manifesto of the NPP, he explained.

The prayer session had in attendance the crème la crème of the Islamic community in Accra. The Chief Of Staff, Frema Osei Opare; Haruna Iddrisu; Muntaka Mubarak; members of the Council of Zongo Chiefs; Moses Asaga; the Chairman of the Council of Elders of the NPP; Acting NPP Chairman, Freddie Blay and Kwabena Agyepong.

Also in attendance was Gabby Otchere-Darko, chairman of the anniversary planning committee of the late Aliu Mahama. The prayers were officiated by the National Chief Imam Sheikh Osman Nuhu Sharubutu.