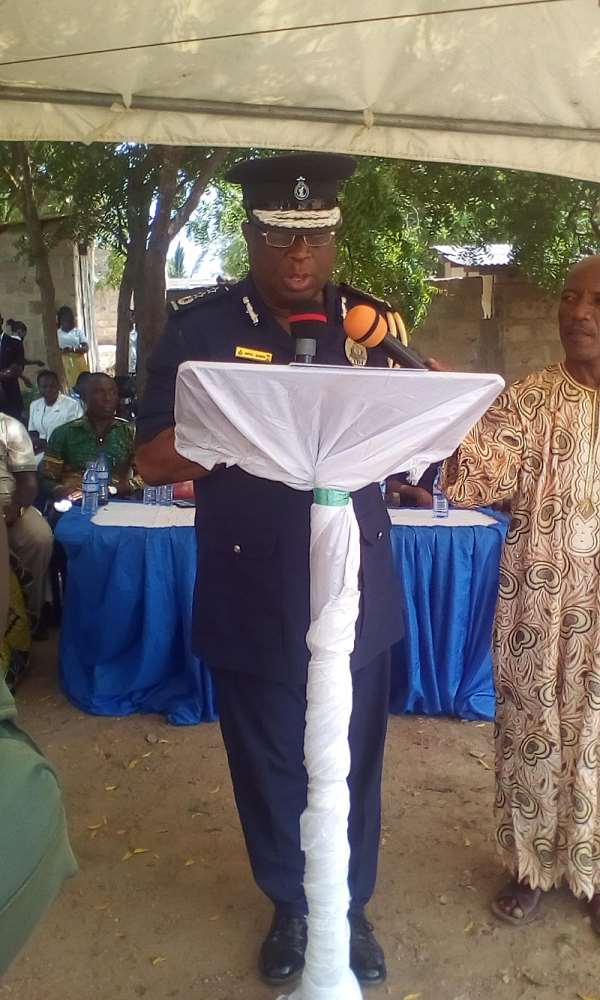 The Central Regional Commander of the Ghana Police Service, COP Revered Neenyi Ampah-Bennin has observed that criminal activities in the country was becoming too sophisticated hence the need for suficicated approach to combat it.

"Therefore, there is the need for all hands to be on deck ensure that peace and stability prevail in the country especially crime proned areas.

Amried robbery is gradually becoming lucrative for school going age and if care is not taken, these children would abandon school for criminal activities.

COP Rev. Neenyi Ampah-Bennin stated these at the inauguration of nearly built s Police Station to boost security at Gomoa Dampoase (Langma. ) in the Gomoa East District of the Central Region.

The edifice was constructed by the people in the community through the effort of the Chief, Nene Narh Ohimeh I.

It comprises of CID/ Station Officer offices, exhibit room, male and female cells and a charge office. The people constructed the police station through communal labour with financial support from the chief, individual personalities, civil society among others.

The Central Regional Police Commander disclosed that the Police administration would continue to provide the needed security for the people of Gomoa Dampoase ( Langma) and its surrounding communities.

He called on them to ensure personal safety and security adding the community watchdogs committee should be formed to augment the efforts of police personnel that would be posted to the station.

Nana Takyi Wiabo V, Chief of Gomoa Nyanyano in his welcome address called on the Central Regional Security Council as well as the Regional Minister, Hon. Kwamina Duncan to visit the vicinity to assess security situation in the area.

He appealed to the Inspector General of the Ghana Police Service to ensure that peace prevail in Gomoa Dampoase (Langma) and its surrounding communities.

The Gomoa East District Chief Executive, Hon.Benjamin Kojo Otoo coomended the Chief of the town Nene Narh Ohimeh I and the people for constructing the police station to boost security.

The DCE noted that the main occupation of the over 5,000 people in the area was fishing and tourism industry.

He was happy the people through self-help had built the edifice to provide peace and stability.

"Each one of us is to ensure personal security. We should not harbour criminals in our homes but rather expose them to the security agencies to face the laws of the land.

The Gomoa East District Assembly will continue to support security agencies to provide the needed peace and security in Gomoa Dampoase (Langma) and the entire District.

As the Chairman of the District Security Council, I want personnel who would be posted to this police station to act professionally for peace and stability to enable the people carry out their economic activities peacefully "

The NPP Member of Parliament for Gomoa East constituency, Hon. Kojo Asemanyi lauded the people for the edifice which he said was going to assist the fight against criminal activities especially landguards.

He noted that he will contact Ministry of Local Government and Rural Development to facilitate redemacation of the boundaries between Gomoa East District Assembly and its neighbouring Assemblies to ensure coexistence.