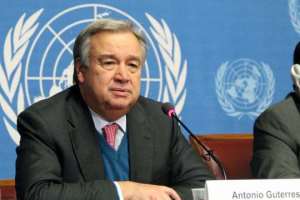 Bonn, Germany, Nov 16, GNA - The UN Secretary General, Antonio Guterres, has urged the global community to work faster on emission, adaptation, finance, partnership and leadership in its resolve to reduce and mitigate the climate change phenomenon.

Speaking at the opening of the high-level segment of the UN Conference of Parties (COP23) in Bonn, Germany, on Wednesday, Mr Guterres also called on the world to adopt a simple climate action rule that would ensure that all major infrastructure projects were green.

'If major infrastructure project aren't green, they shouldn't be given the green light,' he said.

The opening of the high-level segment, which was attended by about 25 Heads of State and Government, was presided over by Mr. Frank Bainimarama, President of COP 23, and Prime Minister of the Republic of Fiji.

The UN Secretary General noted that the world needed more ambitions to go further and faster together since climate change was defying strength of all times.

He said floods, fires, extreme storms and droughts were growing in intensity and frequency and increasingly all over the world, and therefore the need to further cut of 25 per cent in emissions by 2020.

Mr Guterres however, noted that there was an encouraging signs of progress in the global efforts of actions, with countries like China and India with massive economies, being on track to surpass their Paris pledges.

He urged countries to use their 2020 revisions of the Nationally Determine Contributions (NDCs) to close the 2030 emissions gap.

He said countries should also follow through the Paris commitment that calls for raising ambitions.

He further urged donor nations under the Global Climate Fund to assist countries to promote their adaptation and resilience efforts at the country level.

Mr Guterres also commended the G7 nations for their 2015 pledge to provide insurance against extreme weather event for 400 billion vulnerable people by 2020.

He also welcomed the announcement by the Government of Germany in Bonn, to fast forward that ambition.

Both the German and France leaders who spoke at the event called on other countries to match Europe's climate goals.

The German Chancellor, Ms Angela Merkel noted in her address that EU legislators had agreed last week to reform the Emissions Trading System, a market mechanism that was the bloc's main tool for reducing emissions.

However, a glut of free allowances had driven down the price of carbon, which had in turn, not motivated companies to reduce their emissions.

"The certificates are going to be taken out of this scheme in order to be able to develop it into a meaningful instrument," she said, acknowledging that the system had not worked as intended to date.

She said: 'Europe's efforts to date may not always have worked, but it is still on the most ambitious road, and other countries should follow the European lead.

Mr Emmanuel Macron, the French President, on his part said not only must Europe lead the way in efforts to fight climate change, but it could also make up for the impending withdrawal of the United States from the Paris Agreement.

He said: "I propose that Europe replaces America. And France will meet that challenge."

The UN climate summit COP23 in Bonn that opened on Monday November 7, gradually draws to a close on Friday November 17, as delegates entered the last stretch of the two-week conference.