Another note on Atsiiimota the excellent school of our time! 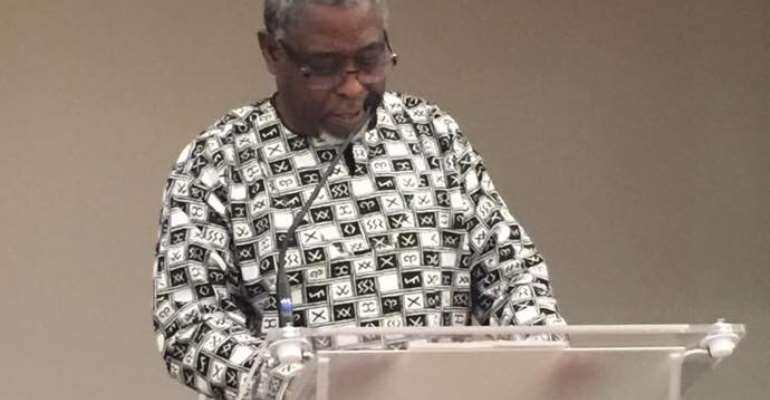 Some 51 years ago, I entered Atsiiimota School, the Grey City on the Outlaws Hill, as a fresh-faced ’Nino’ boy. In those days this great school was situated miles away from Ga as we knew it then, bordering on the fringes of the city of Accra.

Tales are told of a strange and forlorn place home to wandering spirits; a place the name of which none dared to speak for fear of being confronted by the mysterious spirits – jemanwojii – that roamed about. It is said that many slaves were kept hidden away from the authorities after the abolition of the slave trade. A place that could only be referred to as Atsiiimota – This was part of the folklore that gave rise to one of the most difficult riddles, – “Afoo taatso shi mifo ni miko” which translated means “no one cuts the root of the sponge tree but I have done so and taken it away”. The response was Atsiiimota Odonkofoi or in English Atsiiimota, a place of slaves.

The only other time that i had been to the school was when I attended the selection interviewed which was conducted by the then headmaster Mr Chapman Nyaho. I could hardly contain my excitement when I received my letter of admission; the school year ha changed from January to September and I had done only 2 terms in Class 6. On 23 September 1960, about a month short of my 10th birthday, I arrived in a taxi accompanied by a cousin, Kate Majorla Sawyerr, who was also in the school, with my trunk and Chop Box which I could barely balance on my head. I was assigned to Guggisberg House where I fortunate to have two older cousins, Ate Ofosu-Amaah and King Ghartey Mould and a couple of classmates from Experimental School, Teddy Konu and the late Ekow Awoonor, help settle me in. And so it was that I was ‘protected’ from the usual bullying that is meted out to all new students –Ninos.

My pocket money for the ten-week term was ten shillings, one shilling a week which I gave to the Housemaster Mr Pratt at the beginning of the term. From the one shilling, I could feast on ‘dotch’ from Mrs Angbah, buy treats from Mr Doe’s Coke shop or sometimes from the Cadbury House Coke shop and still have change! which someimes i took to the post office down the road from Gberg House.

Atsiiiimota instilled in me the belief that l could succeed in anything I wanted to, as long as I did not break any rules. There were about 10 school rules which had to be adhered to and I broke as many of them as I could get away with. My favourite school rule was the tenth one – Every breach of common sense is a breach of school rules. I caused an eleventh rule to be introduced; no cropping of hair right down to the skull. This, however, was not entirely my fault but mainly because my hair at that time grew at a fast rate and I had many a budding barber try to experiment with my hair which always went wrong.

The structured, regimented day began with the sound of the Rising Bell 5:30am followed by morning trotting before bath time. Students then had to make their beds, complete their chores in time for inspection by the Dormitory Monitor, some quiet time before finally setting off for morning service at the Aggrey Chapel, Oh, I forget that we had morning milk too. There were a couple of lessons before breakfast and more lessons mid-morning after snack time and still more lessons leading up to lunchtime.

After the afternoon siesta, there was games or groundwork depending on the season and then back to the bathroom, evening duties, dining hall again prep and then soaking – light or heavy – common room and then lights out. we were fed so much the not only did I put on weight but my I found myself growing much taller than the less than 4.10″ that I was before I entered the school

This regime was only varied in the week by the early morning work at the school farm or at weekends which were less structured but for a notorious boy like me included many doses of project, fatigue, and detention and the very many table clearing duties that I was I think unfairly apportioned. once a term we went on exeats.

The Atsiiimota of my time stood out for three things; excellent academic tutoring, a breadth of extracurricular activities and deep acculturation and socialization.

The academic work was excellent: what with teachers from all corners of the earth – from West Indies to Australia, from Seychelles to Wales, from Russia to the USA not forgetting our own Ghanaian nationals. The teachers were all excellent – Miss Helen Odamtten, Mr Gilbert, Mrs Hyde, Miss Saravanamutu, Mr Holt, Laidlow, Coates, Cooke, Reverend Agbeti, Father Wild, Osofo Engmann etc etc. The school boasted a well-stocked library, science block, music school, art school gymnasium and the athletics track, cricket oval and swimming pool for extracurricular activities. Some subjects Geography, History, French, Bible knowledge, Science, and Ga were all new to me and as were the wider range of subjects like pottery, modelling, bookbinding, carpentry, and weaving. I struggled in my first year and for health reasons had to repeat my first year because I spent too much time in the hospital. I loved swimming but Mr Peter Renner monitored my time lest I came down with sickle cell crisis.

The extensive range of extracurricular activities ensured that students were exposed to a full breadth of education that was second to none and which provided them with self-confidence. I joined the Boy Scouts and went camping up in the Shai Hills. No risk assessment was carried out and so I ended up being carried up the hills by our scout leader, Citizen Nii Laryea. I joined the cadets, participated in Independence Day celebrations at the Independence Square, and learnt amongst other things how to use a rifle, but was not brave enough to carry out a coup which the guy in the next bed successfully did. I also joined the Photographic Club and the tried my hands at acting in a play.

The Young Pioneers taught me lessons in leadership for life. The late Franklin Dove took me under his wing and encouraged me to teach at Sunday school at Anumle. Simply put, there was always something to do ensuring that the devil did not have any work for idle hands!

Without a shadow of a doubt, Atsiimota was unrivaled as a co-educational school in those days. We boys learned to comport ourselves around young ladies and in a more formal setting so as to smoothen the rough edges of the diamond within me. Social activities were super, the stories we told in the house, of friendships that have transcended the years. I never went to the gate, probably fancied myself as quite a handsome young chap but obviously, the ladies did not think so, so sadly, I entered Atsiiimota a boy though I would have liked to have said that it made a man of me, I still left a boy.

Nowhere else was culture celebrated as in Atsiiimota – with Philip Gbeho or Diana Quarshie Idun and Mr. Tsibu, who could not find my voice tone on the piano keys, teaching songs and anthems to celebrate our founders’ day or Ian Hall setting the Psalm 150 into joyous kpanlogo music to Praise God in his Firmament. Kofi Antubam was there in the art school and you had to learn to draw people in cloth, Mr. Tagoe (you scondunfians) was out there in weaving and oh Mr Angbah of the carpentry school. Where else was one likely to meet Kofi Ghanaba or Saka Acquaye icons of their time in the art and music scene in Ghana? Where else would one learn, edikanfo mo, or achinchi achinchi or neyo amegbetor neyo nede, directly from Ephraim Amu, where else would you see Mohamed Ali, filifili and WEB Dubois?, How many schools could boast of a headmaster who had been our ambassador to the UN, Chapman Nyaho or a lecturer who whilst still a headmaster was appointed the minister of education, IK Chinebuah who because of his Oxford accent we referred to as Comrade ChinaAbuah?.

Atsiiimota helped to form my character as a community-minded person and prepared me for the many careers that I would undertake in my working life. Spurred me on my thirst for knowledge even inconsequential things and most likely as an activist seeing that I witnessed my first strike in the school against Too Rudwick who was then the assistant headmaster. Atsiiimota thought me humility and to respect my elders, my own father had attended the training college before taking on a job with the department of education after his degree and so many cousins from both sides of the family had gone on to Atsiiimota which perhaps was the reason why my father decided that it was the only school capable of giving me a first class and rounded education, enabling me to meet the best in Ghana during my formative years.

I made lifelong friends in Atsiiimota too numerous to name here. But today as we remember those that have passed before us let me recall a few of those who were close to me, Jean Amorkor Laryea, Ansafo Ofei, who passed when we were in Form 2, Frank Adu, Victor Bannerman, Agyarku Wiredu, Marcus Deku, Harold Nii Kpakpo Oti Ankrah, Kojo Lee, Philip Djan, Frank Nelson, Ekow Awoonor, Joel Hyde, John Nii Boye, Lauri Lawson, too many to name, Herman Plange and Dan Morton who passed on several years ago and were my mates at my old school and lately, Diana Konu nee Odjijah and Allotey Kofi Brown who entered Atsiiimota with me and who passed on last year and were buried within a day of each other.

May the good Lord grant them eternal peace and may we all stay blessed.

Thank you for listening to me
Ade Sawyerr, London November 2017