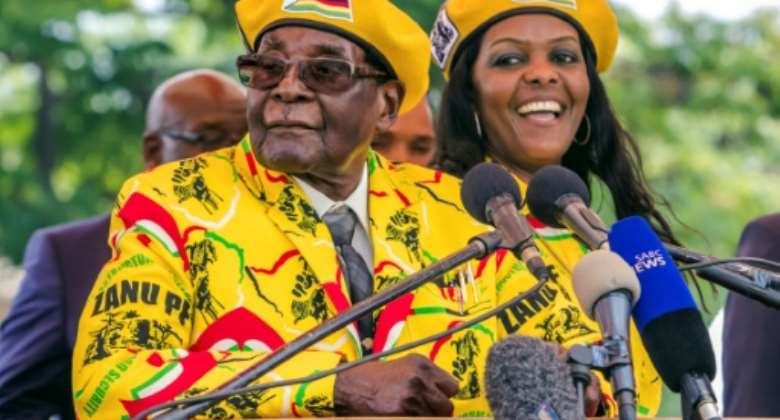 President Mugabe and his wife Grace addressed party members after the vice president, Emmerson Mnangagwa, was sacked -- a move that was followed by the military's warning on Monday. By Jekesai NJIKIZANA (AFP)

Several armoured vehicles drove down main roads near the Zimbabwean capital Harare Tuesday, as tension erupted between President Robert Mugabe and the military that has been a key buttress to his 37-year reign.

In an incendiary statement, Mugabe's ZANU-PF party accused army chief General Constantino Chiwenga of "treasonable conduct" for challenging Mugabe over the sacking of the vice president.

The public dispute has presented a major test of whether 93-year-old Mugabe, who has ruled since independence from Britain in 1980, still has a firm grip on power.

ZANU-PF said Chiwenga's stance was "clearly calculated to disturb national peace... and suggests treasonable conduct on his part as this was meant to incite insurrection".

Before being ousted, Mnangagwa had clashed repeatedly with Mugabe's wife Grace, 52, who is widely seen as vying with Mnangagwa to be the next president when Mugabe dies.

On Tuesday, several armoured vehicles spotted outside Harare alarmed many residents as Chiwenga had warned of possible military intervention.

The reason for the military presence was not clear, but the vehicles may have been on routine manoeuvres or a deliberate show of force. The army's spokesman was not available to comment.

"I saw a long convoy of military vehicles," a female fruit seller about 10 kilometres (six miles) from central Harare, told AFP, while other witnesses took to social media to confirm the reports.

Mugabe is the world's oldest head of state, but his frail health has fuelled a bitter succession battle as potential replacements jockey for position.

Some of the army top brass are seen as strongly opposed to Grace Mugabe's apparent emergence as the likely next president.

"We very rarely see tanks on the roads," Derek Matyszak, an analyst at the Pretoria-based Institute for Security Studies, told AFP.

"Chiwenga threw down the gauntlet to Mugabe... it would make sense for Chiwenga to organise some military manoeuvres to up the ante.

"It's clear we are entering new territory here."

In speeches this year, Mugabe has often slurred his words, mumbled and paused for long periods.

His lengthy rule has been marked by brutal repression of dissent, mass emigration, vote-rigging and economic collapse since land reforms in 2000.

The main opposition MDC party called for civilian rule to be protected.

"No one wants to see a coup... If the army takes over that will be undesirable. It will bring democracy to a halt," shadow defence minister Gift Chimanikire, told AFP.

ZANU-PF's influential youth league, which supports Grace Mugabe as the next president, said in a statement that army chief Chiwenga must not be allowed to choose Zimbabwe's leaders.

Speculation has been rife in Harare that Mugabe could seek to remove Chiwenga, who is seen as an ally of ousted Mnangagwa.

The crisis marks an "ominous moment in the ongoing race to succeed" Mugabe, said political analyst Alex Magaisa in an online article.

"(Mugabe) has previously warned the military to stay away from ZANU-PF's succession race.

"His authority over the military has never been tested in this way."

Mnangagwa, seen here at a funeral ceremony in January, fled the country after being sacked by Mugabe. The 75-year-old -- whose nickname is 'The Crocodile' -- has strong connections with the military and veterans of Zimbabwe's independence war

Mnangagwa, 75, was widely viewed as Mugabe's most loyal lieutenant, having worked alongside him for decades.

He fled the country and is thought to be in South Africa after issuing a searing five-page condemnation of Grace's ambition and Mugabe's leadership.

Earlier this year the country was gripped by a bizarre spat between Grace and Mnangagwa that included an alleged ice-cream poisoning incident that laid bare the pair's rivalry.

Mnangagwa took over as vice president from Joice Mujuru who was axed in 2014 after Grace Mugabe launched a campaign accusing her of plotting to topple the president.

Grace Mugabe -- 41 years younger than her husband -- has become increasingly active in public life in what many say is a process to help her eventually take the top job.