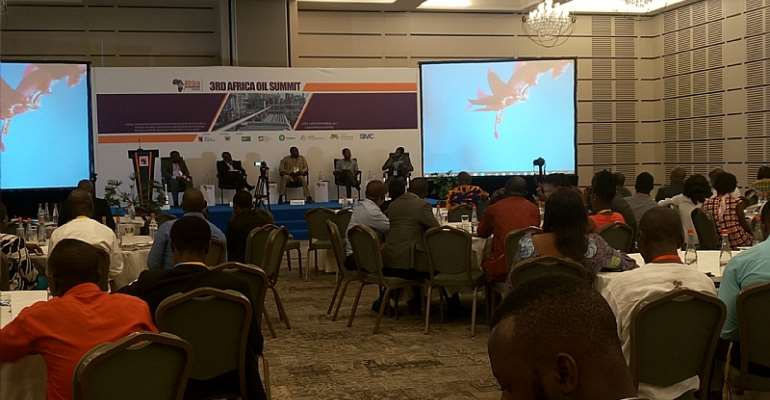 The Deputy Minister for Energy, Dr. Mohammed Amin Adam, has said the legal and regulatory framework for open contracting for the oil and gas sector will be ready by June 2018.

He indicated that even though the Exploration and Production Act 2016 (Act 919) supports contract disclosure, there is currently no legal and regulatory framework to enforce that aspect of the law.

Dr. Amin said this at the opening ceremony of the third edition of the two day Africa Oil Governance Summit in Accra under the theme, “Maximizing the Benefits of Petroleum Resources in Africa: The Role of Open Contracting for Efficient Negotiations, Revenue Capture and Effective Revenue Utilization,” organized by the Africa Centre for Energy Policy (ACEP).

He indicated that their determination to undertake an open and competitive bidding round is however demonstrated by the development of draft regulations for this purpose and the broad consultations being held so far on those regulations.

“To prevent further delay in the application of public tender processes, we have decided to give attention to sections of the draft General Petroleum Regulations relating to competitive bidding; and to lay those regulations in Parliament to pave way for Ghana to hold its first bidding round in 2018,” Dr. Amin noted.

He added that these regulations will stipulate the exact procedures for licensing, pre-qualification criteria and biddable factors, in line with international best practices.

The sector minister said closely linked with this is the demarcation of Ghana’s offshore sedimentary basins into grids. This process is also underway and is scheduled to be completed in time before the bidding rounds are announced.

According to him, open contracting also requires that contracts are made public and easily accessible. This realization has not been lost on our country given the prominence of contract transparency in section 56 of the ACT 919.

“In furtherance of our desire to make open contracting an important feature of the governance of our petroleum resources, the Petroleum Commission has commenced the development of an online public register of contracts; and we are hopeful that this will be completed by the end of this year to allow for public access to petroleum contracts, permits and other relevant information of public interest,” he emphasized.

A total of 14 countries including Ghana and Nigeria announced plans to implement the Open Contracting Data Standard in 2016, a global and non-proprietary open data standard that structures and discloses information on government contracting.

The pledges were not limited to the developed world-Afghanistan agreed to pilot open contracting in major infrastructure projects; Argentina will focus on the health sector; and Ghana and Nigeria will look at extractives and beyond.

Dr. Amin added that when the processes of awarding contracts are well defined and dependably systematic, it reduces the risk on the investor, improves the attractiveness of the country and prevents rent seeking behaviour.

He said it also ensures that capable companies are the ones that get the blocks; not faceless politicians and well-connected individuals.

“Unfortunately, there appear to be more efforts at checking abuse of our resources in the states of origin of foreign international companies than those of resource host countries particularly, in Africa,” the sector minister noted.

He indicated that our institutions have been largely captured because they are under-resourced, often pursuing special interest, and appropriating rent to a few in our society. This has led to devastating consequences for Africa’s development.

According to him, the way to avert this trend among others, is to ensure that the processes of awarding contracts are transparent and credible; and removes doubts on the minds of the ordinary citizens and relevant stakeholders.

Dr. Amin stressed that Government has strengthened the commitment and determination to making the punishment for corruption punitive and deterrent; and to promote the independence and effectiveness of mechanisms for fighting corruption.

He indicated that the conditions under which governments grant rights to undertake petroleum activities are very critical for the design of allocation policies and the choice of allocation system.

“Also, poorly conceived legal, regulatory, and fiscal frameworks may result in inefficiencies and loss of economic rent, which may not be mitigated through the allocation system,” he emphasized.

“If the governance processes can improve to ensure that the we have adequate legal and regulatory frameworks to create strategic linkages in resource development, efficient localization strategies, independent institutions, and investment in research and technology development, we can be confident that human development indicators will improve by 2063,” he stated.

Mr. Boakye encouraged participants to contribute their best to the discourse to bring the transformation we need in Africa.

WHO Acknowledges ‘Evidence Emerging’ Of Airborne Spread Of C...
33 minutes ago