Rawlings Can Never Be The Sole Founder Of NDC - Stephen Atubiga 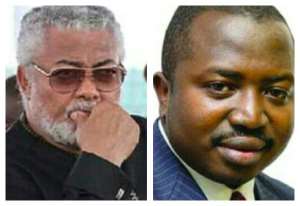 Presidential aspirant of the opposition National Democratic Congress (NDC) Mr. Stephen Atubiga has revealed candidly that Former president Jerry John Rawlings can never be the sole founder of the Party(NDC)

There has been a raging argument within the ranks of the NDC over Rawlings' status as Founder.

It would be recalled that,a former Chairman of the party (NDC),Dr. Obed Asamoah, had said that former President Rawlings is not the Founder of the party.

According to him, at the time of filing for the registration of the NDC, the ex-President was still in the Ghana Armed Forces and could not have represented any district as a founding father.

Speaking in an exclusive interview with Boama Darku host of ‘Maakye’Show on Accra-based Hot 93.9FM,Stephen Atubiga who was answering a question in line with whether or not he acknowledges the former President as the founder of the NDC party, also delineated strenuously that:

"My father was one of the founding fathers of the NDC, we have worked for the NDC. My mother was part of the 31st women's movement so she was very helpful to Nana Konadu. My family and i served Jerry, and Nana Konadu so she, establishing another party was like taking something away from me. I wept, my family and I wept profusely because of the work we had done for her.”

He continued by telling Boama Darko that,"Whether he is dead or alive I recognise Jerry as one of the founding leaders of the NDC, because there has never been a sole founder of a party...Yes, he has lead his part...whether he brought the idea or not a house is always built by a Carpenter ,mason etc"

Mr.Stephen Atubiga who has promised to defeat Mr. John Mahama, Mr. Sylvester Mensah, Prof. Joshua Alabi, Dr. Ekow Spio Gabrah and others in the presidential primaries for the 2020 general elections called for togetherness in the party(NDC)

Kindly watch of the interview in the video below!