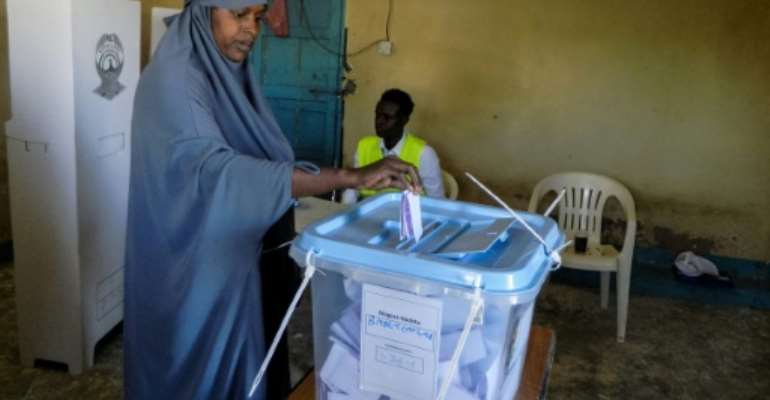 A woman casts her ballot in the presidential election in the self-proclaimed state of Somaliland.. By STR (AFP)

Officials began counting votes in the self-proclaimed state of Somaliland after residents on Monday took part in its third presidential poll, hoping to bolster its democratic credentials and strengthen the case for independence from troubled Somalia.

The northern territory, which is more tribally homogenous and stable than the rest of Somalia, broke away in 1991 and has been striving to attain international recognition ever since, without success.

As vote tallying began shortly after 6:00 pm (1500 GMT), a social media blackout was imposed. The national electoral commission said the move was necessary to prevent interference from outside the borders of the semi-autonomous state and speculation over the outcome.

"Most polling stations are closed now and the internet connection is interrupted as per the instruction of the electoral commission. You cannot use social media platforms like Facebook and Twitter in all the regions of Somaliland," said security official Mohamed Dahir.

No incidents of violence, unrest or disruption were reported during the day's voting.

Three candidates are vying for the state's top office: seasoned politicians Muse Bihi of the ruling Kulmiye party and opposition leaders Abdirahman Iro and Faysal Ali Warabe, who was defeated in a previous election in 2010.

Elections are meant to be held every five years, however the poll was delayed for two years due to drought and technical issues.

Somaliland's history of peaceful, credible elections and democratic transition sets it apart from anarchic southern Somalia, and indeed much of east Africa.

Somalia's election earlier this year saw a president chosen via a limited electoral process in which handpicked clan elders selected delegates who were allowed to vote. 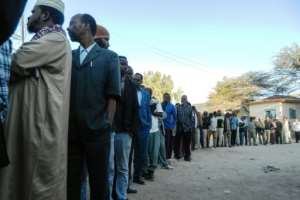 Ahead of the Somaliland election, the three main candidates held a televised debate to present their political agendas, focusing on the economy, jobs and international recognition.

"This is a very critical election... for the youth, they need a leader who can develop the economy and bring jobs so that everybody can stay in their country to enjoy their lives," said university student Ismail Mohamed.

Candidate Iro hailed the election as "a milestone for the entire region" as he cast his ballot earlier in the day.

The poll is set to be the most sophisticated yet with some 700,000 voters registered using biometric eye scanners to identify them before voting.

Somaliland, a former British protectorate, won independence in 1960 but days later joined with Somalia. In 1991, after years of bitter war with the government in Mogadishu, it declared independence from the rest of the country.

Despite its lack of recognition, the state has managed to draw significant investment from abroad, notably Gulf nations.

Kuwait financed the renovation of the airport in the capital Hargeisa, and a Dubai-based company has been contracted to expand the Berbera port in a bid to compete with Djibouti for container traffic from Ethiopia.