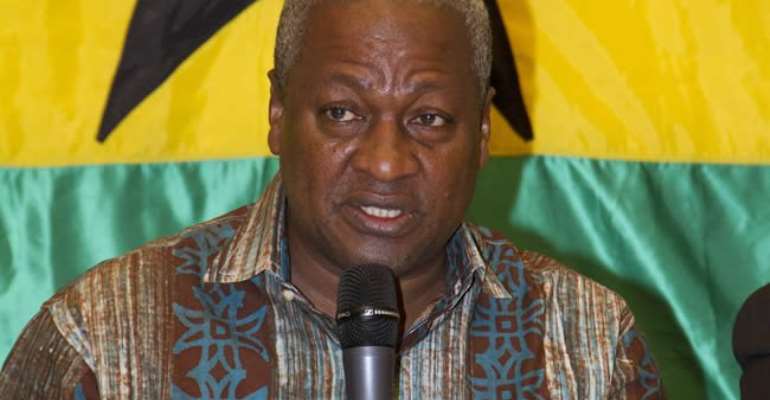 Some youth of the National Democratic Congress (NDC) has served a notice to party leadership they will resist attempts by the party to impose ex-President John Mahama on them ahead of the 2020 polls.

Bring Back NDC (BBN), a coalition of former students affiliated to the party, said it has observed some actions and inactions of senior members of the party which it believes are aimed at manipulating the processes to favour the 2016 presidential candidate.

In a statement copied Myjoyonline.com Monday, BBN Director of Operations, Hannan Legend said the NDC could suffer if processes leading to the selection of a flagbearer are not fair, transparent and credible.

“We note with deep-seated concerns that if the neutrality of the internal electioneering processes is undermined, the party could pay dearly, like 2016, in the 2020 elections,” the statement said.

Read the full statement below:
PRESS RELEASE
DO NOT IMPOSE JOHN MAHAMA ON US!
Bring Back NDC (BBN) upon rigorous reconnection with disenchanted masses, intelligence gathering plus internal information has come to the conclusion that certain individuals and institutions within the party by virtue of their actions, inactions and utterances seem to be manipulating processes to favour the former President HE John Dramani Mahama.

This is epitomized by the recent visit of eighty party-parliamentarians to his office ostensibly to ‘force’ him to contest. And we note with deep-seated concerns that if the neutrality of the internal electioneering processes is undermined, the party could pay dearly, like 2016, in the 2020 elections. BBN believes that John Mahama for that matter any other individual should not be given an unfair advantage in the party’s internal elections because of the following:

First, John Mahama’s decision to lead the party again may be seen as a move for Personal Aggrandizement and bears bad omen to the party. Because, besides fulfilling the myth that he has never lost any competitive elections, there is nothing left for him to accomplish as president because he did his best, campaigned on his achievements and lost woefully. Majority of well-meaning party members and Ghanaians are of the view that if his intentions for the party were genuine he could step aside as a statesman and support it with funds and experience.

Second, recycling John Mahama as our flag bearer would reinforce critics claim that the NDC does not have presidential materials. This has the tendency to bolster the confidence of our opponents’ grassroots and dampen the spirit of our rank and file. Many party adherents speaking objectively contend that there is the need for the main opposition to field a new ticket which would have the added advantage of marketing themselves well enough for a guaranteed victory in 2024, in the event, we lose 2020, a prospect the candidature of John Mahama shuts down. It is strongly believed that it would be a herculean task to market John Mahama against President Nana Akufo Addo considering current developments in the country.

Third, Ghanaians perception of corruption against John Mahama and his appointees was pervasive and equal denying him the moral authority as president to command institutions of state for Good Governance. Thus his laissez-faire attitude did not portend well for the party and the country, hence he deserves no added advantages in his bid to lead the party.

Finally, National Democratic Congress is known as a party for the commoners where anyone can become somebody irrespective of heritage or wealth. This is a niche the party cannot afford to cede to any party. However, events in the last internal elections adversely affected this reputation partly causing us the General Elections, which must be checked to ensure the survival and continued relevance of the party. EYE ZU: EYE ZA!!

Covid19: 85 people arrested for not wearing nose masks in Ko...
48 minutes ago