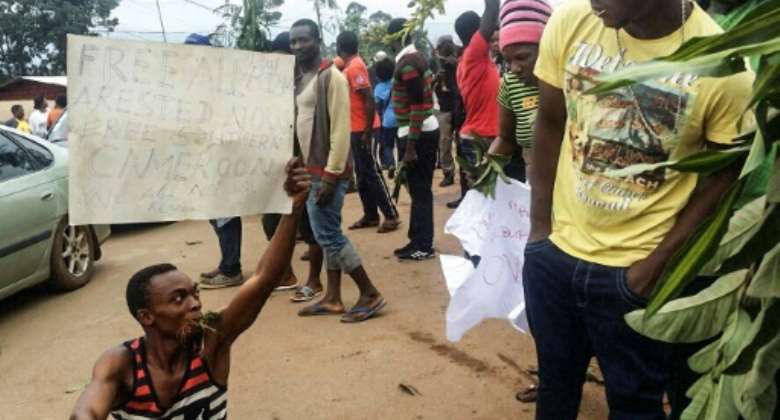 The bombings come after demonstrators in English-speaking parts of Cameroon have protested against perceived discrimination in favour of the country's francophone majority. By STRINGER (AFP/File)

Four makeshift bombs exploded overnight in the main city in Cameroon's restive English-speaking region, but no one was injured, officials said Monday.

"Four home-made bombs exploded in Bamenda, one at 9:00 pm and the three others at 3:00 am," said a source close to the security services.

"The blasts did not cause any casualties. They caused minor damage in various places," the source said, in an account confirmed by a security source in the capital Yaounde.

One of the explosions detonated close to a police unit from the Mobile Intervention Squad (GMI) and another near a well-known supermarket, the sources said.

The other two occurred at a crossroads and at a street near Commercial Avenue, Bamenda's business area.

The blasts come a week after four soldiers were killed in the two administrative areas where most of Cameroon's anglophone minority live.

Their deaths have been blamed by the authorities on "terrorists" -- anglophones campaigning for the two English-speaking areas, the Northwest and Southwest Regions, to secede from Cameroon.

The majority French-speaking country has a large anglophone community that comprises about a fifth of its 22 million population.

Many English speakers say they suffer economic inequality and discrimination at the hands of the francophone majority, particularly in education and justice.

Demands for greater autonomy in a federal structure, rejected by President Paul Biya, have led to mounting agitation, followed by a crackdown.

At least 14 people have died in clashes, as well as five prisoners who were killed while trying to escape jail, according to a toll compiled by AFP.

International monitors, in contrast, say at least 20 and possibly 40 people have been killed in clashes since late September.

On October 1, a breakaway movement issued a symbolic declaration of independence for their putative state of "Ambazonia," led by Sisiku Ayuk Tabe. On his Twitter account last week, he condemned the killing of the soldiers.

The International Crisis Group (ICG) think tank last month accused Cameroon of embracing a policy of "murderous repression" that, it warned, could lead to an "armed uprising".

The Biya government disputes the claimed death toll and has accused the ICG of being "an agency of destabilisation, in the pay of the secessionist movements".

On October 31, the UN High Commissioner for Refugees (UNHCR) said thousands of people had fled from the anglophone regions into neighbouring Nigeria, and the agency was bracing for an influx of up to 40,000.

The anglophone minority in Cameroon is a legacy of the colonial period in Africa.

France and Britain divided up the former German colony under League of Nations mandates after World War I.

A year after the French-ruled territory became independent in 1961, the southern part of British Cameroons was integrated into a federal system. That structure was scrapped 11 years later in favour of a "united republic".