More Than 2 Pounds of Wood, Plastic Discovered In Teen's Body 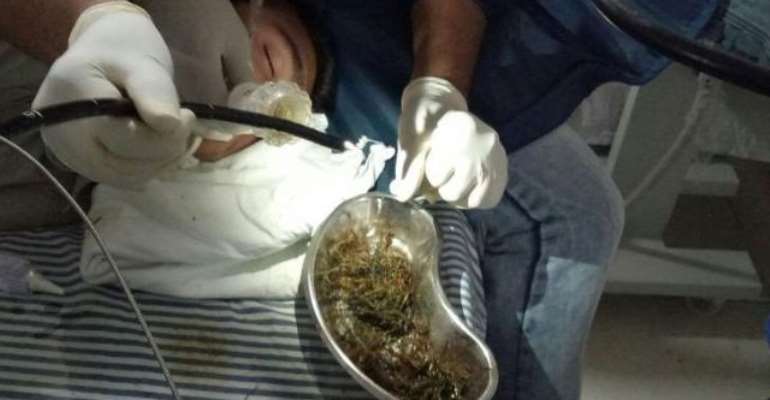 Doctors in India got a surprise they were not planning for after a 16-year-old came in with stomach pains.

Sah was recently hospitalized with stomach pains, and when doctors performed an endoscopy, they found the unusual materials inside his body.

It took surgeons two operations to remove at least 300 grams of the material and he faces other surgeries to get out the rest.

Doctors say that Sah has a secret addiction to chewing on shreds of plastic and lumps of wood.

“Whenever we spotted him eating rubber, we would stop him from doing so, but he wouldn't mend his ways," his father, Gurmeet Sah, a farmer, told SWNS. "Away from our sight, my son continued ingesting these items. As time passed by he became addicted to this, but never complained of any problem.

"We thought the boy has grown up and kicked the habit by himself but that was not the truth. One and a half years ago, Arjun first complained of stomach pain. Since then he has been suffering from acute stomach ache. We took him to several doctors, but nobody could diagnose what was the actual problem of the pain.”

Doctors suspected he had a ulcer when he was rushed to the hospital and began losing weight and had trouble breathing.

"Around a week ago, his condition started deteriorating after he complained of breathlessness and stopped eating altogether,” the father added. “I am thankful to the doctors that saved the life of my son."

Doctors say that the wood and plastic formed a knot in his intestine in a way that even a drop of water could not pass through his body.

“The boy was brought to us in the nick of time,” Dr. Gagandeep Goyal told SWNS. “Any further delay could have become fatal for the boy.”

Following the other procedures, doctors recommend that the teenager get proper counseling to kick the habit.

Rawlings came through for me in my difficult moments as Pres...
57 minutes ago