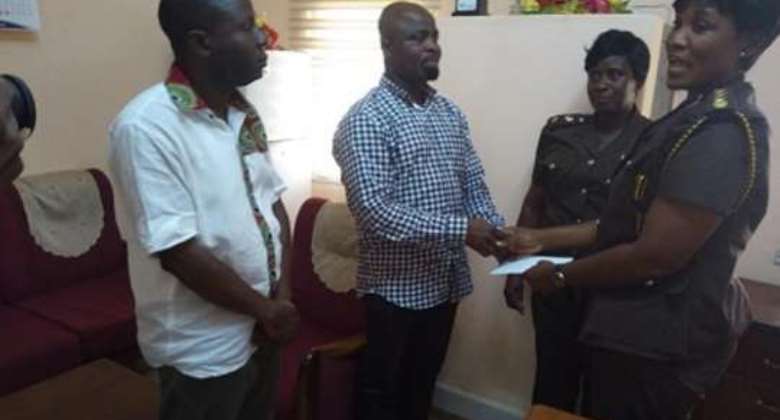 The Prisons Aid Foundation, an NGO, has donated an undisclosed amount to the James Camp Prisons to improve on their operations.

The James Camp Prisons is an open Camp with a relax atmosphere as compared to a walled prison and this is suitable for the re-integration into wider society of inmates upon discharge.

Mr John Ayertey Maunger, the Founder and President of the Foundation, presenting the cash donation to authorities of the Prisons said it would help them fence around the area, where they would locate their internal CCTV camera for security purposes.

He said the Foundation has been established to aid the operations of the Ghana Prisons Service and provide support to the inmates as well.

He said the focus of his Foundation would be to support both the ex-convicts and the Service in their day to day operations.

'We will also educate society to stop stigmatising against ex-convicts and allow them to reintegrate nicely into the society,' he added.

He said the Foundation would also support the ex-convicts with technical and financial assistance to enable them properly reintegrate into society.

Mr Ayertey said one other focus would be in the area of counselling for the ex-convicts upon their release from Prisons and to encourage them that all was not lost.

He said his desire to venture into supporting the activities of the prisons and its inmates was borne out of the great work, Mr Ibrahim Oppong Kwarteng, the Ambassador Extraordinaire of Prison was doing to support Prisons reforms.

He expressed the hope that the friendship that had started would be sustained to support and improve on prisons reforms and rehabilitation.

The Deputy Director of Prisons, Mrs Patience Baffoe-Bonnie, Commander of the James Camp Prison expressed gratitude to the Foundation for the gesture.

She said every Ghanaian should be concerned about whatever happens in the country's Prisons and about the inmates in custody.

She commended the Ambassador Extraordinaire of Prisons for his continuous support to the country's Prisons facilities to see it improved to an international standards.

The Commander told the GNA that inmates transferred to the prisons, were inmates, who have served at least a greater number of years off their sentence in Central Prisons, Local Prisons and Medium Security Prison like Ho, Koforidua, and Nsawam Prisons.

He said at this facility, inmates were made to feel at home with improved environment with the mindset to re-integrate fully into society.

Mrs Baffoe-Bonnie said the facility was in the process of rolling out a project to establish a new department for Creative Arts to develop talents in the areas of sound engineering and playing instruments among others.

'We are encouraging the religious groups to help us build linkages in society to reintegrate his inmates when they are released,' she added.

She said the Ghana Prisons Service, especially the James Camp Prisons needs public support to improve the living standards in the country's Prisons.

She said so many people take activities of the Prisons for granted and called on them to desist from that attitude and support rather.

She said one of the challenges that faced the Prisons was the re-integration of ex-convicts into society, adding that relations should be willing to accept their relatives when they are released and also patronise goods produced by inmates.

Mr Oppong Kwarteng, who is also the Executive Director of Crime Check Foundation, said as an Ambassador, he would try his best to woo benevolent individuals and organisations to continue supporting the Ghana Prisons Services.

'Very soon l will again get someone to take up other needs of the Prisons,' he added.