A Critical Analysis Of H.E Dr. Bawumia’s Response To The Former President 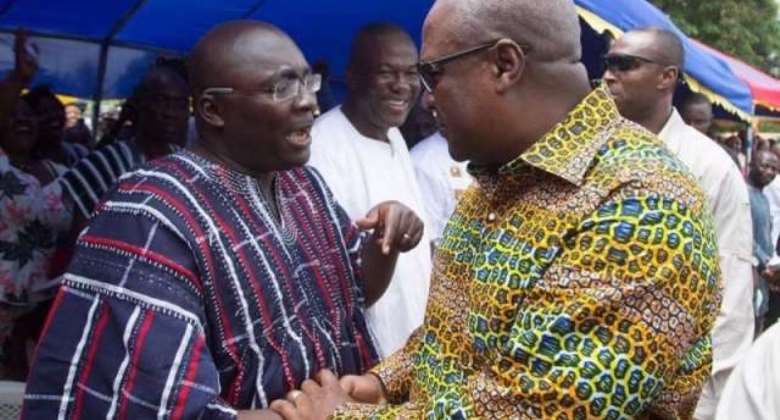 “As thy tongue hath been razor unto others, so shall theirs be unto thee” an advice to Sir Francis Bacon

In response to the former president’s label of the GhanaPostGPS national address system as a scam, our current Vice President felt the need to defend his “novel” NDPAS system. Dr. Mahamud Bawumia had a good laugh listening to what the former president’s reasons were in labeling the initiative as a scam. The irony is just that we may all laugh with or at him after we analyze his response.

It is well to say that the Vice President assumes the responsibility of a teacher to the former president and was bent by all means to disrepute the presidency by equating his vice presidential position with the former commander in chief of our republic. We might here therefore assume a non-prejudicial stance and ask two questions: Was the former president right with his pronounced label? And was it pertinent for the VP to respond and in what manner would it have been appropriate? These are questions we will leave for the reader to decide. It is however hoped that should the need arise from this analysis, Dr. Bawumia will exercise the same restraint and humility- same as he asked of the former president, to be taught a lesson or two and of the errors in his response.

In his response, the Vice President alluded to the fact that the entire Ghanaian landscape is divided into a 5m*5m squares and that each such square property was assigned a digital address with a region, district and post-code embodiment.

“Basically every 5x5m property has a unique digital address on the grid with region, district and postcode. Under this system, 16.1 billion addresses have been generated for the whole of Ghana. It relies on surveyed data from Lands Commission and the Latitude and Longitudes to generate postcodes and addresses for every square inch of Ghana. The NDPAS comes with the National Address Registry to keep records of all citizens on where they register as their office and residential addresses. “ Dr. Mahamud Bawumia

It must be made clear here that Ghanaian properties are not in a 5m * 5m square sizes. Consecutive squares on the grid will share the same region and to some extent, same post-code if they fall within one as such. However, the generation of the unique addresses, post-codes and regional demarcations could not be by square inches. No square inch could have a unique address. A 5m * 5m square space will be equivalent to a 985.25sqin. The VP also mentioned a reference to a National Address Registry which will keep records of citizens. However the reference to the accuracy of the data solely on “where citizens register as their offices or residence”. The accuracy of any data acquired by this means can not be relied on. Reliability of data is key if the essence of this initiative is transitioning our economy into a formal structures. Unreliable data is worse than no data in risk assessment.

Others have pointed out the contradiction with the use of a google platform. The understanding of what an API is and how the NDPAS utilizes an open API to allow access by institutions who need that access. In truth, we are using google platform for the GhanaPostGPS app. The National Address Registry must be an Address Registry of physical properties, not acquired from digital address generated from the app but by input from the registered properties with the lands commission. Again I must emphasize the need for a prudent re-addressing system that makes this whole brouhaha settle down. If the country would conduct a census nationwide, leverage the results with a a coherent address system nationally, and then use that data to design and populate the National Address Registry, only an insane mind will dare criticizing it.

It is laughable to say that the app uses gps systems whereas any other global mapping system uses mathematics. The algorithms that generate gps feeds are mathematical. Aren’t they? Would the VP want a lesson in Algorithms or at least the understanding behind how google combines its powerful search engine with its highly powered mapping system? To obfuscate reality with skewed maze of words would not help the VP. Talk of local relevance: the only thing unique about the GhanaPostGPS is that it added a mesh of grids- each 5m * 5m in size. Each with an assigned code or address.

To say the data used in the design of the app relies on surveyed data to provide the addresses is incommensurables with the fact that the same data is generated from an algorithm that gave us the 16.11billion addresses and post codes. This is quite misleading. The addresses from the VP’s own words are generated from a gps technology(a leapfrogging technology) and we know this to be true. Is the VP throwing dust in our eyes or is he rather blowing dust off of our eyes. Why the 5*5m square meshes are relevant is yet to be explained by the VP. Are the squares identifying the properties or are the properties defining the squares? We can’t have it both ways. And when the size of a property overlaps multiple squares, as it will be for Ghanaian properties, which unique address will define or identify the property?

Ghana is 92,099square miles which retrospectively is 2.385353 x 10^11 square meters. With an economics background, non of us doubts the VP’s mathematical acumen in computing the number of 25square meters that could be contained within the periphery of Ghana. We helped the VP do this computation, since he gave us his 16.1billion addresses figure, and came up with 9.541413 X 10^9 addresses. In simple terms, since we have 2.385353 X 10^11 sqm space which is divided into 25sqm squares, what we end up having is approximately 9.6 billion squares. 16.1 billion generated addresses is about 6+ billions in redundant codes or addresses.

The Vice President also asserted that Ghana is “leapfrogging” into the 21st century. Seriously! We are at least 18years into the 21st. The technology of the day is automation and Artificial Intelligence. I may agree with the Vice President when he said that the GhanaPostGPS is unique and quite unheard of. He is absolutely right. Such ridiculousness must be unheard of and unique as a testament to our giddiness and lack of proper planning on a National scale.

As to the issue of local relevance Mr. Vice President, let give a brief description of our local set ups in Ghana. Majority of our houses are compound or multi-family houses-maybe this is where the idea of 5mX5m squares originated. The house could be seen as a postal stop, if you may. However, each room might contain a family of varying number. Proper addressing system would be that each house is uniquely identified by its unique marker as in Street name and number, 419 Bawumia Road, say. Each room would then have a unique number say; I may live in room 7. So my address is 419 Bawumia Road, Room 7. If this Road is in Bekyem in the Ashanti Region then my complete address will be: 419 Bawumia Road, Room 7, Bekyem, Ashanti Ghana etc. under this address, the National Address Registry system, National Identification Card System and the Ghana Postal System will coordinate to create a more reliable, formal and economically viable structure which will merit the “leapfrogging” description you may assign to it.

Ghanaians will not only be able to do business with one another but with the world. The business opportunity this will create will be enormous and our young Ghanaians May be able to gain employment with an expanded postal service industry which is State owned. We can train more youth in data acquisition and management. We can establish a credit system that is less risky and generate the financial trust of entities that can move our economy into a more productive future. This is what will amount to local relevance.

These are the technicalities with which I have differed with you in your response to the former President HE John Dramani Mahama and I leave the subsequent rhetorics for your proving. If after nearly a year in office your administration has not been able to call any former executive into account then referring to them as scammers amounts only two possibilities and none of which I will say.

Our VP has placed so much credulity on his appreciation for economic facts to the point that they have clouded his appreciation for respect of facts. It is here hoped that Ghanaians will drop partisan egos and address the issues bordering around our collective progress as a Nation. In the age of superior intelligence, Ghanaians and other Africans have no time for political extravaganzas. We require leadership that understands the world not just of today but also of what is to come. Let’s leapfrog into time’s endless possibilities and show ones for all that “let alone, the Ghanaian is capable of manning his own affairs”.

Hottest Photo Reports
Catch up with all the political quotes from our politicians.
Advertise here
More Opinion
ModernGhana Links
“RE: Government must reconsider paying Teacher and Nursing trainee allowances - NUGS general secretary”
Long Live One Teacher One Laptop
Sri Lanka-Bangladesh Ties Can Be a Game Changer in the Region
Self-determination crises: Is it time African countries renegotiated their nationhood?
How countries can contribute to ocean governance in Africa
“Where Are The Projects?” “Seeing Is Believing”
Myanmar And Bangladesh Can Benefit From Strengthening Trade And Connectivity Ties
Prepare For More Hardship In 2022 -Ghanaians Told
Power Distance And The Entitlement Mindset: The Case Of The Ghanaian Elites
TOP STORIES