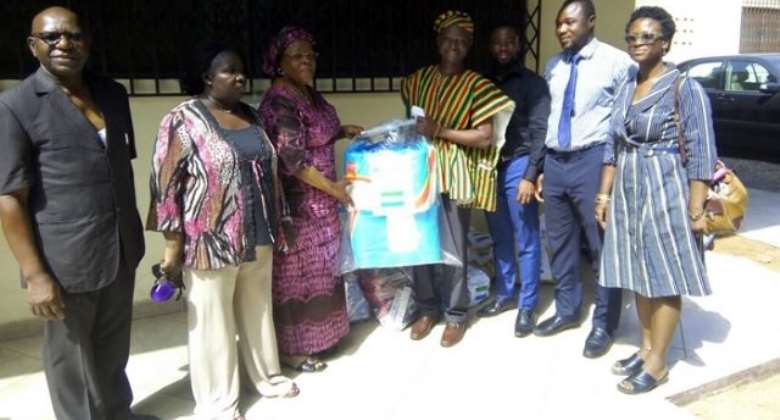 The visit was to discuss issues of mutual benefit to both parties and commiserate with the High Commissioner and the people of Sierra Leone, following the mudslide disaster that devastated the West African country, a couple of months ago.

The group made a donation as a token of support and goodwill to the people of Sierra Leone. The items donated included sanitary towels, toothpaste and toothbrushes, bathing and washing soap, clothing, and beddings, worth thousands of Ghana Cedis.

President of the Association, Mr. Prosper Ahmed Amuquandoh expressed hope that this goodwill gesture would contribute to strengthening the bond that exists between Ghana and Sierra Leone, especially between the youth of both countries.

“Our connection with the youth of Sierra Leone started during the Mandela Washington Fellowship in the United States of America, where we had some representation from Sierra Leone. So, following the mudslide disaster, we, as an association, and feeling the pain of our brothers and sisters in Sierra Leone, decided to extend support and goodwill, through the High Commission, to them, with this donation. We hope this token of support would go a long way to show them how much we care, and hence strengthen the bond of brotherhood that exists between us”.

He further called on the commission to consider partnering the association on strategic projects that will inure to the benefit of both countries.

“The people of Sierra Leone are grateful to you for this kind gesture. It is exciting to know that Africa can now boast of a new generation of young leaders who believe in the concept of Ubuntu. It is my hope that this will be the beginning of many more collaborations between the young people of both countries especially in the areas of leadership and capacity development”.

The Fellowship, which began in 2014, is a six to twelve week academic, leadership and professional training program in selected US institutions that seek to empower selected young people in Africa through academic coursework, leadership training, and networking.

The Fellows, who are between the ages of 25 and 35, have established records of accomplishment in promoting innovation and positive impact in their organizations, institutions, communities, and countries.

‘I didn’t snatch Speaker’s seat; I was only preserving it fo...
21 minutes ago