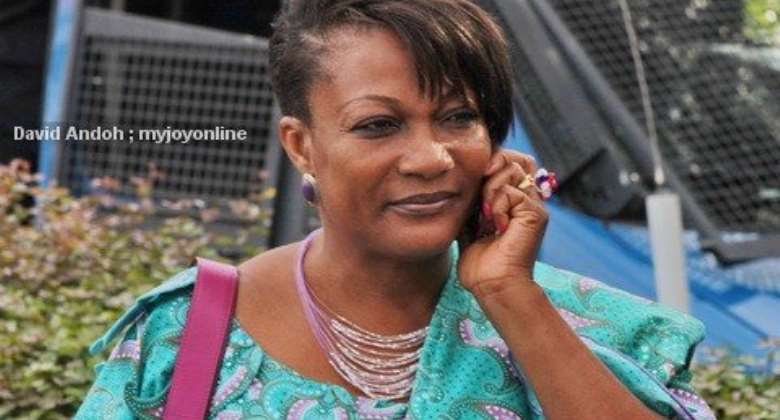 A group of women loyal to the New Patriotic Party (NPP) is calling on the President, Nana Akufo-Addo to intervene and end the feud between Northern Regional Chairman of the party, Bugri Naabu and Minister for Gender, Children and Social Protection, Otiko Afisah Djaba.

According to the Concerned Women in Ghana, the raging bad blood between the two leading political figures in the governing party will adversely affect the smooth running of the National School Feeding Programme which is under the supervision of the Minister.

The concerned women at a news conference Tuesday, also claimed the continuous interference by Bugri Naabu and his assigns in the affairs of the Ministry has put the government in the line of firing range and so the government, as well as party leaders, must call him to order.

The women’s group further stated they as caterers contracted by the government, would be dealt the heaviest blow, should the programme suffer any distress as a result of the misunderstanding between Ms. Otiko Djaba and Bugri Naabu.

“Under the watch of Hon. Otiko Afisah Djaba, the Ghana School Feeding Programme has recruited more caterers- from 4,730 caterers in 2016 to 6,149 in 2017. Zonal Coordinators have also been increased from 56 to 68 in 2016 and 2017 respectively. In this regard jobs have also been created for almost 18,000 caterers across Ghana.”

Read the full statement below:
CONFERENCE BY CONCERNED WOMEN HELD ON NOVEMBER 7, 2017

TOPIC: ENOUGH IS ENOUGH! BUGRI NAABU MUST BE CALLED TO ORDER

Good afternoon Ladies and Gentlemen of the Media. I, on behalf of the Concerned Women across Ghana especially those of us present here, thank you very much for your quick response to our invitation.

We have called you here this afternoon to register our utmost displeasure about the behavior of Mr. Daniel Bugri Naabu (the Northern Regional Chairman of the New Patriotic Party) and his cohorts towards one of our most hardworking Ministers, Hon. Otiko Afisah Djaba.

We are also here to condemn his continuous interference and deliberate distraction in the operations of the Ghana School Feeding Programme in the Northern Region.

As women of Ghana who are keenly following the work of Hon. Otiko Afisah Djaba as Minister for Gender, Children and Social Protection, we strongly condemn his actions and deem it extremely appropriate to raise our voices against the constant abuse, name-calling, demonization, character assassination and hiding behind others to wantonly interfere in the work of the Minister by Chairman Bugri Naabu and demand that he is brought to order.

We have been silent and patient for far too long, expecting our government and other well-meaning Ghanaians to restrain and call Mr. Bugri Naabu and his cohorts to order, but to very little or no efforts have been made to protect the integrity of the government and the Minister to ensure the smooth implementation of the good policies and programmes of Nana Addo Dankwa Akufo-Addo.

Mr. Daniel Bugri Naabu and his cohorts’ continuous distraction has given the government a bad name in the Northern Region in his attempt to demonize people like Hon. Otiko Afisah Djaba, Hon. Salifu Saeed (Northern Regional Minister), Hon. Solomon Boar (Deputy Northern Regional Minister), Hon. Iddrisu Musah Superior (Mayor of Tamale) and many others. Turning himself into a tin god and a “bulldozer”, Bugri Naabu has succeeded in taking unilateral decisions to sack even the NPP regional council of elders, constituency party chairmen, deputy chairmen and women organisers just to satisfy his own parochial interest.

Ladies and Gentlemen, we are therefore imploring the government to call him to order to ensure peace and unity in the country and the Northern Region in particular.

Enough is enough! Bugri Naabu must be called to order. He must stop behaving as if he is the only one who worked to bring the NPP to power and thus expects his personal interests to be above the supreme interest of all Ghanaians.

It is quite obvious that Mr. Daniel Bugri Naabu sees himself to be untouchable in the NPP and therefore feels that he must decide who should be appointed by Hon. Otiko Afisah Djaba into any position under the Ghana School Feeding Programme, which is a national programme.

We are very much surprised about why Bugri Naabu and his following are so determined to show much disrespect to Hon. Otiko Djaba, and why they interfere and distract her work and recruitment into the Ghana School Feeding Programme?

In fact, Otiko ABRÉ›!
Mr. Bugri Naabu must stop organizing NPP youth and women organisers, and also stop inciting them to undertake actions that bring the government’s name into disrepute.

We are fully aware of his clandestine involvement in the recent locking up of the Northern Regional offices of the Ghana School Feeding Programme by the Burma Camp group in Tamale. We are also aware that he is behind all the demonstrations, press conferences and media attacks on Hon. Otiko Afisah Djaba by a few dissatisfied women in the region. Some of the Press Conferences were held in Bugri

Naabu’s private residence and the recent ones at the Nyohini Presbyterian school and Mafara Hotel.

The reckless incitement and creation of tribal tension among coordinators of the Ghana School Feeding Programme in the Northern Region is highly irresponsible and very dangerous. We appeal to Mr. Bugri Naabu to desist from these tribal and violent actions.

Ladies and Gentlemen of the Media, we wish to thank the President, Nana Addo Dankwa Akufo-Addo for appointing Hon. Otiko Afisah

Djaba as a key member of his government and for offering her the opportunity to serve the people of Ghana. She is a role model and continues to inspire and mentor more women and young girls to take leadership positions.

Under the watch of Hon. Otiko Afisah Djaba, the Ghana School Feeding Programme has recruited more caterers- from 4,730 caterers in 2016 to 6,149 in 2017. Zonal Coordinators have also been increased from 56 to 68 in 2016 and 2017 respectively. In this regard, jobs have also been created for almost 18,000 caterers across Ghana.

For the first time in the history of Ghana, all the Regional and Zonal Coordinators are women, strengthening the affirmative action Ghana is striving to achieve.

In further transforming the School Feeding Programme and creating more jobs for Ghanaian women, the Ministry of Gender, Children and Social Protection and the Ministry of Finance as we are aware are working hard to scale up the GSFP by 30% and increase the feeding grant from 80 pesewas to a more realistic amount.

Ladies and Gentlemen, we once again want to thank the President, Nana Addo Dankwa Akufo-Addo and the Management of Ghana COCOBOD for the new initiative of introducing cocoa drink and biscuit to pupils of the School Feeding Programme in addition to their meals.

All these are some of the innovations being introduced by Hon. Otiko Djaba to ensure that our children, women and farmers are the biggest beneficiaries of the School Feeding Programme, to reduce poverty and hunger.

Friends from the Media, the NPP manifesto emphasized the “change for jobs” and in line with this promise, the Minister for Gender, Children and Social Protection, Hon Otiko Djaba has offered more jobs to women of this country and still working hard to offer more jobs with several other innovations.

We want to take this opportunity to congratulate Hon. Otiko Djaba and the President especially for remembering and offering the widows of the late Mr. Kwadwo Baah Wiredu (Former Finance Minister) and the Late Courage Quarshigah (Former Health Minister) enviable positions in the Ghana School Feeding Programme.

We humbly call on our able President, Nana Addo Dankwa Akufo-Addo to bring Chairman Bugri Naabu and his cohorts to order, so that the Gender Minister, Otiko Afisah Djaba can have her peace of mind to work for the government and the good people of Ghana. We believe Nana Addo can do it!