Duke’s Parliamentary Diaries: A Pack Of Bills And Empty Chamber.....Week 5 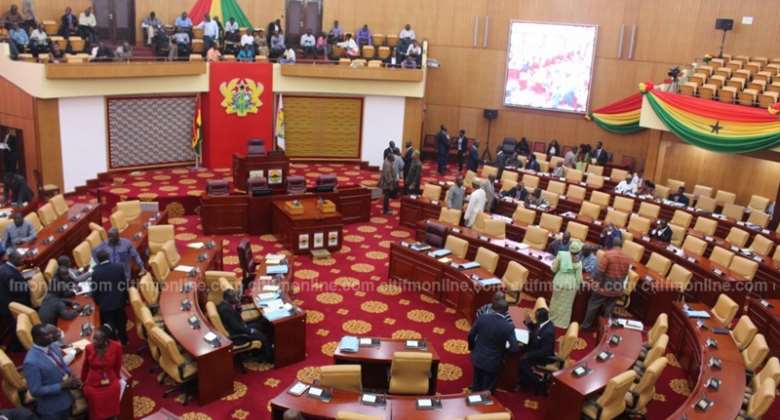 The House returned to duty last Tuesday, October 31, 2017, with a difference in time schedule. Yes! Proceedings begun at ten minutes past ten in the morning, a sharp departure from what has been happening in the House at least since a rainstorm ripped off parts of the roof of Parliament in January.

Up until last Tuesday, proceedings roughly begun at midday; a practice some found good, others found very bad, but at least at the very beginning, the rationale of the time shift was to give workers fixing the roof of Parliament, the luxury of early morning hours to work.

The change in time was announced at the end of the fourth week, but judging from the number of Members of Parliament (MPs) in the Chamber when the Speaker took his seat on the first day of business for the week, the message from the Majority Leader, did not seep into the consciousness of the MPs.

Empty Chamber
The presence of less than ten MPs at the start of business in the House on Tuesday was a matter of serious concern for the Rt. Hon. Speaker, Mike Oquaye, who minced no words in chastising the seeming lack of punctuality by Members to the Business of the House, and capped it off with the fact that the Ghanaian tax payer expected some form of “seriousness” from the MPs with regards to their attitude to business of the House.

Subsequent to this, numbers in the House at the beginning of business in the course of the week were appreciable at least from my standpoint.

On the Floor this week, Youth and Sports Minister, Isaac Asiamah (NPP, Atwima Mponua), delivered a statement on the occasion of Africa Youth Day.

The statement served as fertile grounds for the Minority Leader, Haruna Iddrisu (MP, Tamale South) to take government to task on the recent rise in the incidence of a phenomenon that has been uncannily tagged “Political Vigilantism.”

To him, the Akufo-Addo Administration had done very little to stem the worrying trend that is fast casting an indelible slur on the ten-month old NPP administration, and concluded that the Interior Minister should shun the rhetoric and get to work.

With the passage of the two bills, the other bill in the same vein, yet to be passed is the Northern Development Authority Bill.

Within the scheme of things in the House, another major bill being fine-tuned at the consideration stage is the Office of the Special Prosecutor Bill.

Last week, there was heated debate across the aisle during the second reading stage of the bill. During the debate on the policy and principles of the bill, the Minority through MPs such as Leader, Haruna Iddrisu, Dr. Dominic Ayine (NDC Bolga East), Mahama Ayariga (NDC, Bawku Central), Rockson Dafeamakpor (NDC, South Dayi) and Inusah Fuseini (NDC, Tamale Central), made the point that there was nothing novel about the Special Prosecutor especially when the 1992 Constitution gives such powers to the Attorney General.

To them, government and indeed, Parliament, could be threading on dangerous grounds trying to carve out a bill from Article 88 of the constitution without amending the constitution.

In the view of Haruna Iddrisu for instance, the absence of the twin word for corruption-bribery in the bill, was very worrying, and could not be justified in any sense.

The Majority through its Leader, Osei Kyei Mensah Bonsu (NPP, Suame), and members such as Yaw Buaben Asamoah (NPP, Adenta), Alexander Abban (NPP, Gomoa West) among others, essentially made the point that there was nothing wrong with the approach government had taken towards creating the office of the Special Prosecutor to deal with public sector corruption not sparing private interests in the quest to fulfill a campaign promise and importantly reduce the impact of corruption.

Alexander Abban even dared anyone who thought the constitution was being violated to create the office of the Special Prosecutor to head to the Supreme Court.

In her concluding remarks to the House, Attorney General, Gloria Akuffo, indicated that government would remain resolute and surmount any obstacle on the path towards the passage of the Office of the Special Prosecutor Bill.

In the course of the week, the House led by the Constitutional, Legal and Parliamentary Affairs Committee, took portions of the bill through the consideration stage.

So far twenty, clauses of the bill have been worked on. Still related to bills, another flagship bill of government, the Zongo Development Fund bill was taken through the second reading stage. The bill among other things seeks to create a fund that would address the challenges peculiar to Zongo Communities in the country.

The major issue that sprung up in the course of the debate was the issue of funding. The bill as currently presented before the house, provides the fund with seed money of 50 million dollars, and leaves the allocation of further resources to the discretion of the Finance Minister.

This arrangement however, is one that a section of the house from the Majority and the Minority are opposed to. The joint Committees on Finance and Local Government, that worked on the bill in their recommendations, stated that there must be a dedicated source of funding. This view was trumpeted by Opposition front Benchers, Muntaka Mubarak (NDC, Asawase) and Ahmed Ibrahim (NDC, Tain).

The Sector Minister, Boniface Abubakar Sadiqque is however of the opinion that government's commitment towards uplifting living conditions in Zongos would drive the needed resources into the coffers of the Fund to support the agenda of the Ministry, whilst he works hard to access donor funds to augment the budget for the sector.

On the last day of sitting in the week, Parlaiment approved a number of things – First, the report of the Appointments Committee on the President's nominee For Deputy Food and Agriculture Minister was approved.

Thus, Kennedy Osei Nyarko (NPP, Akim Swedru), gets to replace William Agyapong Quaitoo (NPP, Akim Oda), as Deputy Minister after the latter resigned earlier in the year for disparaging comments made about farmers of northern extraction in the tumult of government's fight against the ravaging fall army worm invasion.

Other pieces of legislation worked on by the Subsidiary Legislation Committee in the shape of Timber Resource Management and Legality Licensing Regulations, seeks to clarify the legal regime for the timber trade in Ghana in accordance with a Voluntary Partnership Agreement signed with the EU in 2009.

The VAT (Exemption of Active Ingredients, Selected Inputs and Selected Drugs or Pharmaceuticals) Amendment regulation, which waives some taxes on ingredients for the local production of drugs was also approved by the house.

Outside the Chamber
While deliberations were unfolding on the floor, on the sixth floor of JOB 600(the office complex of the MPs), proceedings of the Mines and Energy Committee (without the minority) with regards to Adansi Asokwa MP, KT Hammond's motion for the recision of the 510 million dollar AMERI deal had resumed.

Taking his turn at the hearing was Energy Minister, Boakye Agyarko, who in brief, after testifying to the Committee for over an hour submitted that the AMERI deal could not be justified on any front whether technical or financial.

The Minority Spokesperson on Mines and Energy, Adams Mutawakilu picked up his own axe with the submissions of Mr Agyarko insisting that the submission is a vindication of the Minority's position on the AMERI deal.

During the week under review, the Public Accounts Committee held a sitting to scrutinize the accounts of some Ministries in relation to the 2015 Auditor General's Report.

The issue of unearned salaries reared its ugly head once again at the sittings.

Also, using all the arsenal at their disposal, the Minority started a campaign to get Ghana's High Commissioner to South Africa sacked for his infamous ' some Ghanaians are more Ghanaian than others” comments.

Not even an apology from underfire diplomat, George Ayisi Boateng would douse the flame of the onslaught from the Minority to get Ayisi Boateng. The apology was tagged insincere by Minority Spokesperson on Foreign Affairs, Samuel Okudzeto Ablakwa.

The Pressure is still on as some Minority MPs want the Foreign Minister summoned to answer for the conduct of the High Commissioner.

Chairman of the Foreign Affairs Committee, Frank Annor Dompreh (NPP, Nsawam Addoagyir) has condemned the statement but believes that the apology is enough and Mr Ayisi Boateng should not lose his job.

The Office of the Special Prosecutor Bill is expected to progress through the consideration stage and Ministers would appear before the house to answer questions at the behest of some MPs.

–
By Duke Mensah Opoku/citifmonline.com/Ghana
The Writer is the Parliamentary Reporter for Citi 97.3 FM, Adabraka-Accra

Navrongo: Navro-Pio appeals to Akufo-Addo to complete abando...
33 minutes ago

US economist Steve Hanke urges Ghana to set up currency boar...
1 hour ago