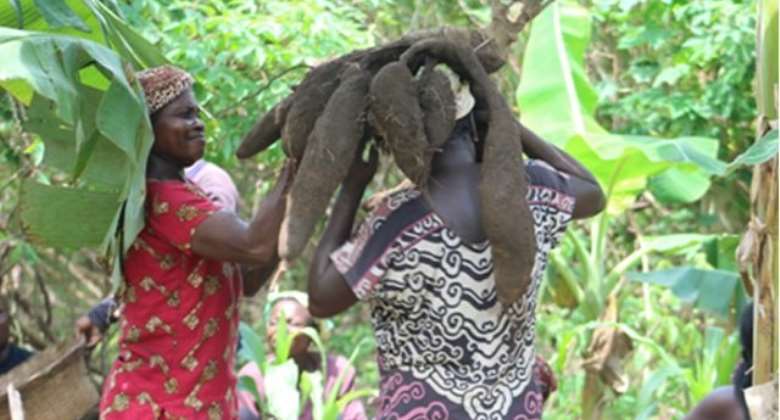 SNV Ghana, in collaboration with the Natural Resource Institute of the Greenwich University-UK, has organized series of Farmer Field Forums (FFF) on cassava production for farmers in Asueyi in the Techiman Municipality.

The initiative is under the Increasing the Performance of the Cassava Industry in West and Central Africa (IPCI-WCA) Project which is funded by the International Fund for Agricultural Development (IFAD).

The year-long training is aimed at equipping farmers with knowledge on improved agronomic practices to help farmers maximize yields on their farms so as to be able to provide sustainable raw material supply to a 7 ton per day gari processing plant built in Asueyi to industrialize gari production and improve the lives of cassava farmers in the Techiman catchment area.

The project which fits into the government’s flagship one district one factory policy, was initiated by the Ghana Agricultural Sector Investment Project under the PROVACA project with IPC-WCA intending to maximise its benefits.

Asueyi is a one of the 19 communities that constitute the Techiman Municipality in the Brong Ahafo Region. Before the 1983 fire outbreak that destroyed their farms, Asueyi was predominantly a cocoa growing community. All efforts to revive cocoa farming in the community proved futile as their lands were no longer suitable for cocoa cultivation. In the absence of cocoa, cassava came to the rescue. The Asueyi community, is now known for the production of several hundreds of tons of cassava. The Challenge for the cassava farmers has, over the years, been how to add value to their produce.

This led many of them to resort to Gari production albeit on smaller scales. The processing plant when completed, will help residents of Asueyi to produce gari in larger commercial quantities free of health and other risks, given that their current production relies heavily on inefficient cook stoves.

The Renewable Energy Advisor at SNV Mr Dramani Bukari says the plant would avoid the unsightly pile of cassava waste around the gari processing vicinity in Asueyi, as the cassava peels would now be used as feedstock to the plant, which would moderate the negative effects of gari processing on the environmental conditions of the area. It would also completely remove the deleterious health effects of smoke inhalation, which characterizes their current production. “To him sustainability is key for the 120kW gasification plant which is expected to more than double production or increase production by some 60% from the current production levels of 3.0tones a day to about 7.5tones a day which is why SNV under this project has organized this series of Farmer Field Fora FFF) for cassava farmers in Asueyi and its surrounding communities so they can meet cassava supply requirements to the plant”, Mr Dramani told reporters.

Training
At one of the model farms, Agriculture experts took beneficiary farmers through how to apply improved agronomic practices in the three major phases of cassava crop production so as to be able to maximize their yield. Mr. Joseph Yeboah, an Agriculture expert and agric consultant for the SNV/IFAD cassava project said the training included phases such as land selection, preparation, planting material selection, weeding, fertilizer application/mulching and refilling and harvesting as well as crop yield assessment.

In addition, a business development and entrepreneurial training was held for the processors in Asueyi.

Safety
Ishmael Lante, an environmental scientist, with SAL Consult, said a thorough environmental impact and risk assessment has been done on the gasifiction plant and the workers will be taken through thorough training before they begin work.

Practical production
Having passed the medical exams, the farmers and gari processors were taken through scientific methods of preventing competition between their cassava crops and weeds as a well as how to maintain the farm. According to Mr. Joseph Yeboah, this phase is a multiple effect stage as the yielding capacity of the cassava depends heavily on how well weeding, mulching/fertilizer application as well as refilling is done on the farm.

To climax the training, harvesting and crop yield assessment was done on the demonstration farm to assess the yielding ability of the various varieties planted for farmers settle on the appropriate variety that best suits their farm soil.

The farmers and gari processors in the Asueyi Community say they are now confident that in the coming years, they will make a significant contribution to the country’s economy.