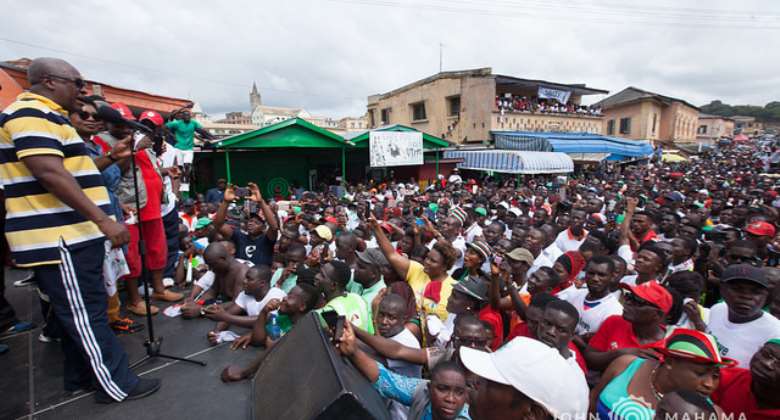 Former President John Mahama has attributed the massive defeat of the National Democratic Congress (NDC) in the Central Region, in the 2016 general elections, to disunity and egocentric tendencies among its members.

This is the third Unity Walk after earlier ones were held in Tamale and Accra respectively.

The walk, which began from Siwdu Park in the early hours of Saturday, ended at London Bridge.

Among the bigwigs in attendance were Dr. Ekow Spio-Gargrah, Prof. Joshua Alabi, former Accra Mayor, Okoe Vanderpuye, some past ministers and appointees in the erstwhile Mahama administration, the Central Regional Chairman of the party, Bernard Allotey Jacobs, as well as top figures of the party in the Central Region.

However, conspicuously missing from the dignitaries was former Vice President Paa Kwesi Amissah-Arthur, who is a native of the Central Region.

Describing the region as the most swing region in the country, he said: “depending on where it swings to, that party will win. So in 2016, Central Region swung away from the NDC and we lost and I know in 2020, Central Region will swing [towards the NDC].”

In terms of parliamentary elections, prior to the 2016 general elections, the NDC had 16 seats in the region, whilst the NPP had 7, but the NPP grabbed 19 seats leaving only 4 for the NDC after the 2016 votes.

What became a big blow to the NDC in the Central Region was the loss of its two traditional seats of the Ekumfi and the Twifo-Atimokwa constituencies to the NPP.

However, former President Mahama believes the damage could be repaired if the internal wrangling in the party in the region is dealt with.

“I beg you, all those involved, everybody, put your egos aside and put the party interest first, NDC first before your personal interest, so heal the divisions among you.”