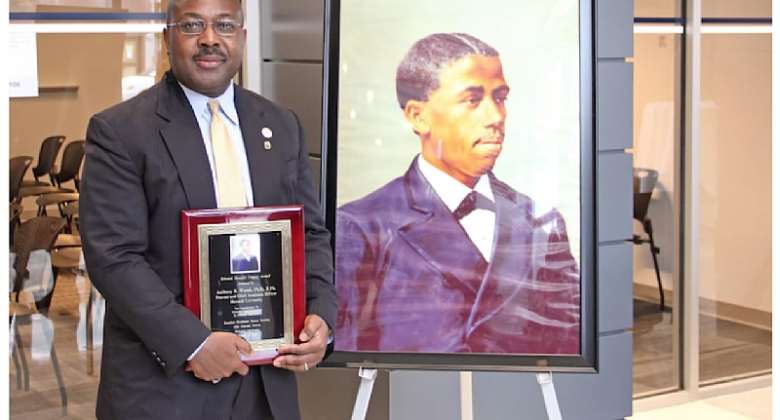 Dr. Wutoh who becomes the seventh recipient of the Edward Bouchet Legacy Award has led and participated in numerous international programs like sponsored projects across various African countries including South Africa, Zambia, Nigeria, Kenya, Rwanda, and his birth country of Ghana.

Dr. Wutoh has varied research interests some of which include health services/outcomes research, international health, pharmacoepidemiology, and HIV/AIDS infection in older patients. He has received over $50 million US dollars in grant funding for his various projects from prestigious US-based and international institutions.

Provost Wutoh remarked at the event after receiving the award that: “We may not always know what God has planned for our lives, who we will touch, where we will live, what we will do, but that is okay, because He knows. It is not so important that we know where we are going, what is important is that we are making a difference while we journey along the way. Thank you again for this honor, and God bless.”

Anthony K. Wutoh was appointed on June 22, 2015. Prior to becoming Provost he had served Howard University in respective roles including Dean of the College of Pharmacy and Assistant Provost for International Programs and Director for the Center for Minority Health Services Research among others.

Research conducted by this writer revealed that the feat by Dr. Wutoh is not the first time the prestigious honor is going to a Howard University champion of excellence in higher education. In September 2015, the current President of Howard, Wayne A. I. Frederick, M.D., MBA, received the award only a year after he assumed office in July 2014.

Yale University chief research Archivist Judith Schiff was the first ever winner of the Bouchet award in 2011. Professor Pablo Laguna is the immediate past recipient, he received it from the American Physical Society in 2016.

The Edward Bouchet Legacy award was established by The Edward Alexander Bouchet Graduate Honor Society to recognize stalwart contributors to the growth and expansion of the Bouchet Society in honor of Bouchet who received his doctorate in physics from Yale University in 1876. Bouchet is the first African American to earn a Ph.D. from an American university and also the first in the US to be elected to Phi Beta Kappa.

Howard University is a prestigious and historically black private, research university with 13 schools and colleges based in Washington DC, US. It was established in 1867. Find out more about Howard at www2.howard.edu .