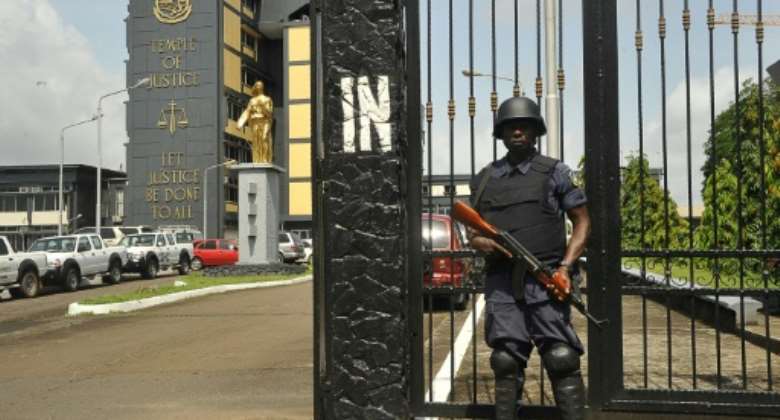 Liberia's Supreme Court will decide on Monday whether a runoff vote for the presidency will go ahead between former international footballer George Weah and incumbent Vice President Joseph Boakai. By Zoom DOSSO (AFP/File)

The extraordinary delay in electing Liberia's new leader amid claims of electoral fraud is entrenching existing divides between the candidates and outgoing President Ellen Johnson Sirleaf, as voters wait nervously for a resolution.

The Supreme Court will decide on Monday the fate of a presidential runoff vote originally scheduled for November 7, either by setting a new date or prolonging it indefinitely until a legal complaint by the opposition Liberty Party is resolved.

The runoff, to be contested by former international footballer George Weah for the Coalition for Democratic Change (CDC) against the incumbent Vice President Joseph Boakai for the governing Unity Party, is therefore on ice -- and no one knows for how long.

The Liberty Party's Charles Brumskine came third in the first round of the presidential vote on October 10, and immediately alleged that fraud and irregularities had tainted the results, claims which were backed soon afterwards by Boakai but downplayed by Weah.

"Supporters of Weah feel Brumskine and others are prolonging the process while others feel the law should take its course," he added.

The National Elections Commission (NEC) has already made clear the original date "does not look possible to meet", in the words of its Chairman Jerome Korkoya, after ballot paper shipments to the provinces were recalled and training of polling agents halted at the Supreme Court's request.

The country is no stranger to election disputes: The results of its two post-civil war presidential votes in 2005 and 2011 were both contested by Weah's CDC, which ultimately conceded defeat after going through a complaints process.

This time, however, the CDC accused Boakai of "trying to steal the elections from the Liberian people after over 40 years in power," in a statement emailed to journalists on October 31, after the vice president announced he would back Brumskine's actions.

Feuds break into the open

In parallel, Boakai and Brumskine have accused Sirleaf of "interfering" in the elections by meeting polling officials at her residence ahead of the vote, though her press secretary has said the talks were "consistent with her constitutional role".

A hint of Boakai's true motive in supporting the fraud allegations, critics say, was clear in a leaked early draft of a speech given on October 23.

The vice president was poised to go public with a weeks-long complaint by his supporters: that Sirleaf backs Weah, not the man who served alongside her in government for 12 years.

"Individuals close to her and operating under her instructions are in fact giving multiple forms of support to our main opponent in the presidential race, the Coalition for Democratic Change (CDC)," according to the draft, which was seen by AFP, before more diplomatic wording was added at the last minute.

Brumskine and Sirleaf have unresolved grievances of their own. He has called for the electoral commission to be sacked even as she gave it her full backing, and this week he accused Sirleaf of having a hand in starting the nation's 1989-2003 civil war, in which a quarter of a million people died.

Information minister Eugene Nagbe then called Brumskine's allegations "the rants of a sore and selfish loser who is so blinded by ego and arrogance... even after 12 years of rejection by the voters," alluding to the fact that the Liberty Party candidate has now lost three successive presidential elections.

International donors have poured billions into Liberia since Sirleaf was elected in 2005, and are eager to complete what will be the country's first democratic transition in seven decades, while watching nervously from the sidelines.

Diplomatic and political party sources told AFP over the last few days that African Union Chairman and Guinean President Alpha Conde and Togolese leader Faure Gnassingbe, chairman of the Economic Community of West African States (ECOWAS), applied intense pressure to stakeholders to come up with a resolution quickly during a visit on Wednesday.

Liberian voters, meanwhile, have no choice but to play the waiting game before they get a chance to pick their next leader while keeping an eye on tensions ramping up between the parties.

"We do not want no violence. Whomsoever that the court will rule in favour (of), that's the decision of the land, we cannot go against it," said T. Klon Maxwell, a security guard eyeing the front pages at a newsstand in Monrovia on Saturday.