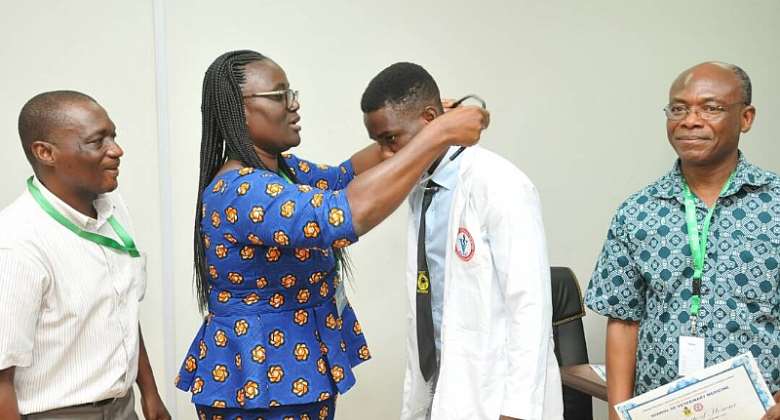 21 students of the School of Veterinary Medicine at the Kwame Nkrumah University of Science and Technology (KNUST), have been graduated at a short ceremony.

The white coat ceremony symbolizes a graduation from the pre-clinical phase of learning veterinary medicine into the clinical phase.

Students who are ushered into the clinical phase will be posted to institutions to assist in veterinary services.

Speaking at the 3rd White Coat Ceremony, the dean of the School of Veterinary Medicine at KNUST, advised the students to “not just wear them for the pride, but must be prompted to respect and uphold the highest esteem of the values of this profession. You must be dedicated, committed and diligent in whatever you do at the clinic and beyond, bearing in mind that your patients do not talk. ”

He bemoaned the inadequacy of veterinary doctors in the country, saying, “currently we have about 30 veterinary officers or doctors in active service with the ministry of food and agriculture. Meanwhile we need at least one veterinary doctor per district, and you can imagine the gap that is left.”

Professor Folitse thus called on the government to employ students who graduate as veterinary doctors from the school into active service.

“At least, every year, we produce a number of students, but then unfortunately even the first batch of students up till now, the government has not employed them, that is the sad aspect. Already, some of them have started leaving… Not because there are no jobs, but the jobs are there, the vacancies are there, but probably the goodwill to employ them, they have not yet been given the clearance to employ.”

Earlier this year, an outbreak of Swine Flu in the Ashanti Region was reported to have been spread to other farms through the activities of quack veterinary doctors.

The Ashanti Regional Director of the Veterinary Services, Dr. Emmanuel Edward Effah, as a result of the situation called on the government to employ enough veterinary doctors to help avert any such situation in the future.

Some trained veterinary doctors in the country recently demanded immediate employment from the government after several months of being jobless.

The doctors have also issued a month's ultimatum to the government, threatening that they may take legal action if the government fails to meet their demand.