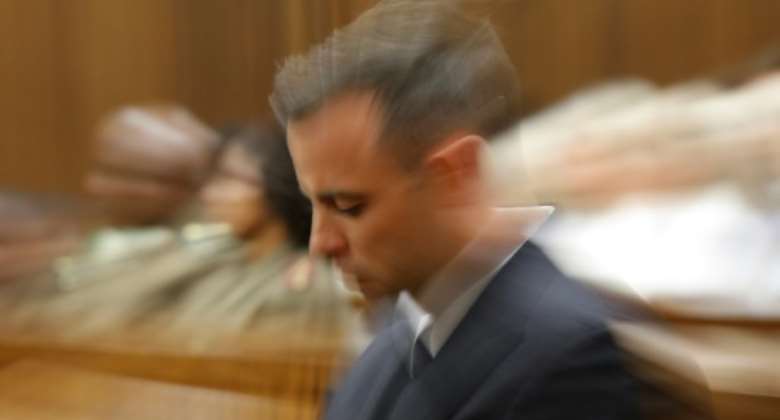 The world was rivetted by the Pistorius trial -- a case that combined a disabled sporting hero, a blonde model and a bloody night-time killing. Prosecutors are now appealing against Pistorius' six-year term, saying it was too lenient for a murder conviction. By Kim LUDBROOK (POOL/AFP)

South African prosecutors will argue Friday for Oscar Pistorius to be given a longer jail sentence, saying the six years he is serving for the murder of his girlfriend was "shockingly low".

The National Prosecution Authority will present its case to a one-day hearing at the Supreme Court of Appeal in Bloemfontein.

Pistorius, 30, will not be present for the latest stage of his long legal case, with judges expected to hand down their ruling at a future date.

The Paralympic athlete shot dead Reeva Steenkamp in the early hours of Valentine's Day in 2013, when he fired four times through the door of his bedroom toilet.

He pleaded not guilty at his trial in 2014 and has always denied that he killed Steenkamp in a rage, saying he mistook her for a burglar.

Pistorius was originally convicted of culpable homicide -- the equivalent of manslaughter -- but the appeal court upgraded his conviction to murder in 2015.

The minimum sentence for murder in South Africa is 15 years, but he was sentenced in 2016 to six years due to mitigating factors, including his claim he believed he was shooting an intruder.

"We believe the sentence is shockingly low," NPA spokesman Luvuyo Mfaku told AFP. "It is inappropriate if you look at the gravity of the offence."

Mfaku denied that the NPA was pursuing Pistorius due to his fame, saying "it is not personal, we are addressing a principle here".

'Pay for his crime'

A spokesman for the Pistorius family was not available to comment, but his lawyers have previously said they accepted his sentence.

At the sentencing hearing last year, High Court judge Thokozile Masipa said: "He cannot be at peace. I'm of the view that a long term of imprisonment will not serve justice."

But Steenkamp's father Barry told the court that he wanted Pistorius to "pay for his crime".

Members of the ruling African National Congress (ANC) women's league, who attended many court sessions, have criticised the sentence for failing to send a message against domestic violence.

Previously a role model for disabled people worldwide, he was released from jail in 2015 after serving one year of a five-year term for culpable homicide.

He returned behind bars after his conviction for murder, and is being held at a prison in Pretoria.

In a television interview, he said he believed an intruder was in the house and "instant fear" drove him to grab his gun from beside his bed and walk on his stumps towards the bathroom.

"All of a sudden I hear a noise, at the toilet. I presumed it was the toilet door opening and before I knew it, I'd fired four shots," he said.