George Orwell And The Making Of George Ayisi Boateng… 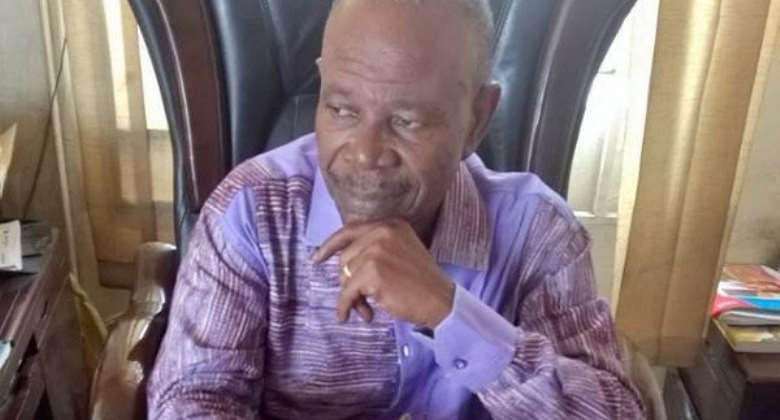 This week I have asked myself, reflectively, who am I, or who have I become, or who should I become, a citizen or a spectator? I thought I have done quite well, in the last couple of years, to stand up, and to tell truth to power. But the world is becoming scarier every day, and sometimes I wonder whether God has forsaken his people.

North Korea, as warned, poses a tremendous threat to the world – with her regular nuclear missile testing that is getting close and closer home, with the scaring propaganda exchanges between President Trump, and Pyong Yong. When last month the American military began to fly close to North Korea, as an exhibition of military power, I felt trapped, and began to wish for an early return home, for I was then in America.

What are the implications of these international nuclear and propaganda war in Ghana, and on Africa, for that matter? Ghana is a close ally of the United States of America, and several countries of the west, following from several bilateral and diplomatic agreements. What are the implications, for us, of potential missile attacks on any of these countries? And what would be the Russian response, and the position of China, in the event that a full blown nuclear conflict, involving North Korea, breaks out?

Ghana government has just issued another Bond, the GHC10billion Energy Sector Bond, which is currently under-subscribed. What are the reasons for the under-subscription of the bond? And what are the implications of a successful floatation of a GHC10 billion bond, on Ghana’s economy, and petroleum pricing?

The government of Ghana is currently drawing up the fiscal budget for 2018. With the introduction of the Free SHS, and the introduction of the One-District-One-Factory, and several of such policy promises, the government is expected to spend heavily in social and educational interventions. What are the implications for tax burden on the ordinary citizens, and how do we help bring the conversation to the public, for everyone to be part of the discourse?

Issues of climate change are engaging the attention of every government in the world. Our water bodies are drying up, galamsey is threatening livelihoods, and making the future look uncertain for our children. Our forest reserves are depleting at alarming speed, our fish stock is fast drying, and there seem to be an ever-widening gap between the rich and the poor, in terms of disease prevention, maternal mortality, pre-term babies are dying because of the absence of basic incubatory equipment.

Vigilantism is threatening the security of this country. Government facilities are either being seized or being vandalized, government officials, including DCEs are being locked out of their offices. Several Ghanaians, including both ordinary and prominent, are saying that they no longer feel safe, because of the activities of these vigilante groups.

You have been appointed as the High Commissioner of South Africa, representing the government of Ghana. You have been given an opportunity to speak to members of TESCON, university students members of the NPP, an opportunity to inspire them into greatness, to educate them on government programs, and how they could prepare themselves to take advantage of the available opportunities, a chance to ask for their inputs into the ongoing budget discussions, and a chance to educate them on the happenings in the world, and the implications on their future.

You rather used the opportunity to insult Ghanaians, and create the impression that they are more Ghanaians than all others. You squandered such an opportunity, you made the members of TESCON feel that they don’t have to work hard; all they need to do, is to continue to be members of TESCON, and to walk into your offices, and you will give them preference over everyone else.

This is not proper. This is poor, a wrong way of thanking Ghanaians for the privilege given you to serve in such a high office. To be called “Your Excellency” requires a higher circumspection, and responsibility; you cannot justify why you became so irresponsible in your utterances.

For those of you who don’t know the story, this week, George Ayisi Boateng, Ghana’s High Commissioner to South Africa, has said that we are all Ghanaians, but there are some who are more Ghanaians than others. He said this during a conversation with TESCON members in Kumasi, and that he is going to ensure that whenever there are job opportunities, he would consider NPP members first, before any other Ghanaian.

And to think of it, that, George Ayisi Boateng, actually transliterated the imperatives in George Orwell’s Animal Farm, that we are all Ghanaians, but some are more Ghanaians than others, is the heights of the indecency in our political piggery; but I don’t blame him, I blame those whose duty it is to ensure that he does not merit his position, but who are too afraid to tell the President, that George is too unwell to be a High Commissioner.

One of my favorite quotes, in literature, is this anonymous ancient proverb, sometimes attributed to Euripides “Those whom the gods will destroy, they first make mad”.

The NPP has been in power for ten months. I have been part of those who celebrated that victory. But the chipping away of the victory is beginning to look ugly. The Delta and the Invisible Forces began the journey back to the bush. Free SHS stabilized the situation. Then bam! We have Ayisi Boateng, with his skull on.

Christian Council of Ghana, Peace Council, and all the councils, where are you? This is a spark of war, it is a whistle for segregation, an irresponsible act of low intellect that has the potential to plunge the country into vindictive attacks, and such should not be allowed to go un-condemned.

Go ahead, Mr. George Ayisi Boateng, go ahead, to recruit all the NPP members into the Army, the Police, Immigration, make some Pilots, send some of the macho men to the labor wards, let them serve as Midwives, send all the members of the Delta Force, into our hospitals, let them perform surgeries, removing tooth, kidneys, and bottles.

No responsible leader, worth his salt, will fall into such a filthy trench of a gutter. Your mentality is of war; such postures have brought untoward civil wars to several countries of the world. Putting you up for criminal prosecution is something I will support. But more importantly, removing you from your position as the High Commissioner to South Africa, is immediately desirable. You are too lowly-minded to occupy such a high office; Ghana deserves better.

You see, heavily built men are vandalizing state facilities, locking up public officials, and destroying state properties, in the open and with impunity, all because they were those who protected the victory that was won by the NPP. Why should we need any of such people to protect the victory that was won? How could we call such a democracy a matured one? Can’t we have non-aligned police force, non-aligned army officers, non-aligned electoral officials, to provide security, and to provide credible election processes, so that we don’t need Azorka and his boys, we don’t need Sammy Awuku and his boys, we don’t need whoever lifted heavy metals to protect the victories of candidates, so that we shall have our peace of mind after elections?

Ghana’s democracy has grown, but I will like to repeat my concerns, that I don’t see our democracy, in the current form we are practicing, as sustainable, no! There are several things fundamentally wrong with our governance and democratic journey. A situation where we need, taflatse, fools, to act in order to win elections, is never the ideal; because it results in the President being forced to appoint, taflatse oo, fools, into his government.