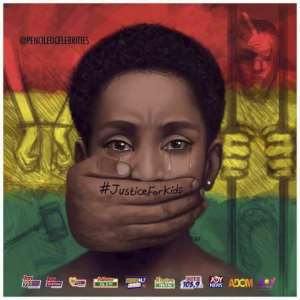 A police investigator has been accused of conniving to withdraw a case in which an 11-year-old girl was defiled twice and is now battling with severe health complications.

The officer, whose name is withheld, sat in a meeting with the families of the suspect and victim to 'broker peace' over the 21 October defilement at Kaneshie, a suburb of the capital, Accra.

She testified to an agreement to withdraw the case and directed the victim's mother to see a typist at the Kaneshie police station to type out the withdrawal letter.

But the mother of the victim said her conscience did not allow her to follow through with the officer's directions after witnessing the suffering of her daughter.

The 11-year old Abena [not her real name] was first fingered while she slept, her mother [name withheld] told Joy News' Maxwell Agbagba.

"The first time she was asleep she thought it was a dream. She was dreaming that someone put the hand in the vagina," she narrated.

The 11-year old woke up to see the suspect but fell back to sleep still believing it was a dream.

The next time, the suspect was more direct. He grabbed the defenseless girl and defiled her in the night. The victim fearful of the worst could not shout.

Today, Abena cannot control her bowels and urine and a medical report has confirmed, there was forceful penetration.

"She will be sitting down and you realize she has urinated on herself. Even when she wants to go to the toilet she does not feel it," the mother held back sobs.

"She is not feeling well at all", the mother continued and recalled how her daughter fell in the bathroom.

The suspect confessed to the criminal act after she confronted him the same Friday night of the sexual abuse.

The mother said her father met with the father of the suspect who had agreed to foot the medical bill of ¢1,500 accrued at the time of this report.

He also pledged to pay ¢2,000 as compensation to the family.

"My father said, it is okay they should bring the money" the mother explained. But the mother has defied a family agreement and wants justice for her child.

#Justiceforkids
The Multimedia Group last week launched the #Justiceforkids campaign with the goal to pushing for justice for abused children.

The comprehensive campaign will educate children and adults alike with Radio and TV shows spotlighting the issue and the challenges that confront society today and shaping mindsets of the public.

Platforms under The Multimedia Group through will organise stakeholder fora that will lead to policy proposals that can be tracked and accountability demanded.

The campaign also seeks to create awareness amongst the general public and generate endorsements by notable personalities in society, speaking against child abuse.

Its objective is to push policy makers to make the necessary moves to ensure policy alignment to support victims and prosecute perpetrators.