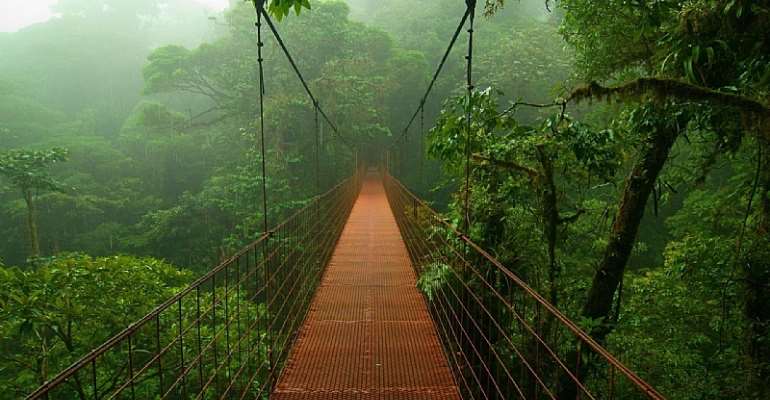 Facts are sacred, but comment is free. Truthfulness is a defence to defamation. But even so, I apologise unreservedly to NANANOM, TOGBIAWO and MANTSEMEI for likening their peculiar environment to that of a dark impenetrable jungle.

A jungle is not a thick bush, but deep thick forest, and I dare say that is chieftaincy for you today in modern Ghana.

Since the brutal senseless killing of the Ya-Na in Yendi in 200l, till date, there is no Ya-Na as a successor. Bimbilla is a hot bed, due to succession, and Ebubonko, Cape Coast, even though there is a chief, Nana Kwaku Ampah!!!! Someone is strutting about pretending to be a chief, Nana Kwaku Aduaku!!

Former Minister of Tourism Mike Gizo is strutting about as the Paramount Chief of Shai even though there is Odeopeor King Ahwa, and in Akwamufie, there is a running battle challenging the legitimacy of the person currently calling himself Akwamuhene.

Even though the Supreme Court has ruled that Nii Dowuona cannot be the Osu Mantse, he has defied the law and so manipulated the system that seven chiefs met at dawn to elect him as President of the Greater Accra Regional House of Chiefs, and therefore a member of the National House of Chiefs.

How come that qualified medical doctors, university professors, seasoned barrister and men of prominence are prepared to go every length, including spilling blood, if necessary, to be a chief?

In the days of yore, during the time up to the 19th Century, in our part of the world, a CHIEF was the powerhouse of the community. He was the Head of State, he was the Prime Minister, he was the Minister of Defence, and the Chief Justice. He was the Chief Priest, levied taxes on the people, sentenced people to death and declared war against other people. He was a demigod who spoke through OKYEAME and never walked alone. A chief was the acme of man's life.

Our colonial masters, the British, themselves, ruled by monarch, respected our institution of chieftaincy and took deliberate steps to strengthen the institution through indirect rule.

Left to Nananom alone, we would never have broken the yoke of colonial rule. But thanks to UGCC, the new professional class and rising businessmen and retired soldiers from the world war, a struggle took place and we shook off the shackles of colonial rule.

The colony, made up of Ashanti Empire, Fantes, and Northern Protectorate, now became a NATION, with one Head of State, seated in Accra starting from Kwame Nkrumah, down today to Nana Addo Dankwa Akufo Addo. Every chief in Ghana is subservient to Nana Addo as the Head of State of Ghana.

The President rules through his Ministers, in charge of Education, Energy, Transport and other divisions. So, the chief is no more Head of State, and no more Prime Minister.

Her Lordship Justice Sophia AKuffo and her judges dotted all over the country administer JUSTICE, and Lt General Obed Akwa as Chief of Defence Staff has command over every soldier in Ghana. The Christian religion has taken over the spiritual needs of the people, and even Otumfuo the Asantehene, an Anglican, goes to church to listen to sermons and take Holy Communion.

Literally, all the practical functions of a CHIEF have been taken away, leaving them ONLY as CUSTODIANS of the land. Chiefs today collect royalties for their lands and they sell and lease lands to developers, both Government and individuals.

Local Government is so weak that in over eighty per cent of the countryside, the recognizable authority is the chief. Meeting the people means visiting the Chief's palace. Anytime you hear that Nana Addo, our President is visiting anywhere in Ghana, it means NOT that he is visiting the DCE but rather the CHIEF of the place.

The Asantes in particular make chieftaincy looks so enviable.

Their chiefs move with so much pomp, color and ceremony as to make the chief take on god-like attributes. My younger brother has been installed Twafoohene of Berekum Traditional Area, and how many times have I not bought schnapps just to greet my own brother!!

And, their names!! Professor Adei of GIMPA fame was telling us the other day that almost all our Nananon are guilty of blaspheming God because of their titles……DAASEBRE, ODENEHO, OSAGYEFO, OSEEADEEYO, OTUMFUO…………………..all these are attributes of ONLY the ALMIGHTY GOD!!

But some of them have interesting titles……………………..OKOANADWO (he fights in the night) OKATAKYIE (he covers his back) BEYEEMAN (he comes to build a nation) and OKOFOROBOO (he fights to climb a rock!!).

It is for all these that people are ready to go any length to become enskinned, enstooled and or installed as a CHIEF.

And the core of the problem is that unlike China where married couples can give birth to ONLY one child, here, in our land, parents can generate as many as 10 children. I for instance, I am the 7th born of my parents, and when the stool becomes vacant, there are so many eligible candidates, not just from the rotating ruling houses, but also from the house itself – and oftentimes, MONEY, almighty MONEY becomes the deciding factor.

Let us turn our binoculars on ACCRA.
Until 1879 when the British Colonial Authorities decided to move the seat of authority from Cape Coast to the Christiansburg Castle of Osu, Accra was a small coastal settlement, around James Fort and Ussher Fort.

I first came to Accra in 1967 to attend Achimota School. In those days, ACCRA was very small, made up of only “Accra” Osu, Adabraka and New Town, including Korle Gonno and Chorkor. In those days, Dansoman had not been built, and Teshie was far away.

The most dominant tribe, speaking the Ga language, is the GAS and the Ga Mantse is the spiritual embodiment of the Ga people. When the stool became vacant in 1965, my father in law, Moses Yarlai Yartey was about to be enstooled as the Ga Mantse but he deliberately ran away from that role and NII AMUGI II in his twenties, was installed.

After 39 years on the throne, Nii Amugi went to the 'village' on 10th December 2004, and the stool became vacant. Who was to succeed him?

There are FOUR ruling houses in the Ga Royalty, and these are –

By convention, the next Royal family in line is the Teiko Tsuru We, but the other two gates, Abola Piam and Tackie Commey were not prepared to succumb to their unwritten law, so each of them brought up a candidate, resulting in total chaos.

Previously the Palace of the Ga Mantse was deep inside the 7 quarters of the Ga people, but during the Nkurmah Regime, Government built a big spacious palace for the Ga Mantse at Kaneshie, located inside the estates. NOBODY lives in the Palace and oftentimes it is empty, safe a few labourers and office staff of the Ga Traditional Council. For this reason, seizing the palace and or taking it over for purposes of installation or enstoolment ceremonies is not too difficult.

And then again, there is this confused requirement of “Gazette”.

The official Government record is called “Gazette” and the act of registering a person's name in the official register of chiefs is known as “Gazetting” or “gazette”.

We lawyers are still debating: is a chief the person who has been gazetted or can a chief lose his status as a chief merely by a cancellation of his name in the Register?

All this contribute to the chaos at the front of Nananom.

Right now, there are two chiefs in the Ga State – Nii Tsuru and Nii Adama Latse. Who is who? I even hear the Abola Piam Gate has also popped up somebody!!!

Am I competent to hazard a probable road map through the thick jungle of Mantsemei? I doubt it, but for what it is worth, let me attempt these suggestions:

Someone wrote the other day that a politician complaining of a bad press is like the pilot of an aeroplane complaining of a bad weather, or the captain of a ship complaining of storms at sea. In life MONEY and POLITICS is like the air we breathe, the food we eat, the water we drink – you can NEVER insulate their influence anywhere. The solution is to adhere strictly to time tested solid principles otherwise you will NOT survive.

I am not a Ga, but from anthropological studies, is it true that the title NII is a corruption of River Nile?