New Times Corporation Gets Board Of Directors 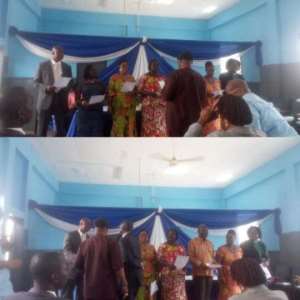 The National Media Commission (NMC) has inaugurated a seven-member Board of Directors for the New Times Corporation to enable it play a functional role in the media landscape.

The new board is under the chairmanship of Very Reverend Mrs Ama Afo Blay.

Nana Kwesi Gyan-Apenteng, the Chairman National Media Commission, at the ceremony noted that it had become necessary for the Corporation to have a new board to enable it find solution to the welfare of staff.

He said though the Corporation was faced with challenges there were also too many negativities which were undermining the progress of the organisation.

He said it was therefore imperative for staff as well as the board to realise their mandate as a corporation and live up to expectation to put the organisation back on truck.

All these according to Nana Gyan-Apenteng could not be achieved if there was no trust among one another and advised the staff members to have hope in their leaders to move the institution forward.

He appealed to the staff to think creatively to confront the challenges head-on in order to keep the corporation running.

'Use this day as a new beginning to ensure that things change and live up to your mandate,' he stated.

Mrs Rose-Margaret Kpodo, the Outgoing Chairperson, handing over documents to the new board expressed gratitude to government for the opportunity given them to serve on the board.

She said the Corporation was not financially strong but had resources and with the right strategies and policies could be put to good use.

She however asked the new board to review the Corporation's Act, saying a lot remained to be done and with the background of the new board members change could be initiated.

Very Rev. Mrs Ama Afo Blay, the New Board Chairperson of the New Times Corporation, expressed gratitude to the President for the confidence reposed in them and the opportunity to contribute to the development of the country.

She said Ghana had a vibrant press and despite the lapses played a key role in the political discourse, national identity, and popular culture.

Very Rev Blay noted that the Ghanaian news media have given a voice to citizens and could be described as among the most free in Africa.

However, she said the rate of change in technology calls on all to update their skills or become obsolete in no time.

She said in this challenging times with the emergence of the new media the board would ensure the speedy implementation of policy decisions to achieve a sound industrial environment to forestall unrests at the work place.

She acknowledged the contributions made by the previous board and assured that they would continue from where they left off.

The Chairperson also called on the stakeholders of the New Times Corporation to assist the board achieve its mandate.