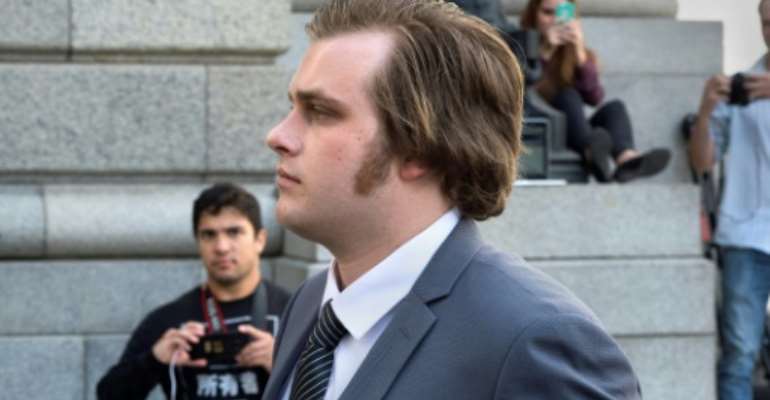 Henri van Breda, seen outside the Western Cape High Court before the start of his trial, took the witness stand to deny bludgeoning to death his two parents, and brother, and wounding his sister. By RODGER BOSCH (AFP/File)

A son of a wealthy South African family on trial for killing his parents and a brother with an axe on Tuesday recounted the grisly attack which he has blamed on intruders.

Henri van Breda, 22, who has pleaded not guilty, calmly took to the witness stand for the first time since the trial opened in April in the Western Cape High Court.

The former University of Melbourne student is alleged to have killed his 21-year-old brother Rudi and parents Martin, 54, and Teresa, 55, and left his sister Marli struggling with near-fatal injuries to the head, neck and throat.

He casually narrated his version of the night of January 27 in 2015, when his family was hacked to death at their home inside a secure golf estate in Stellenbosch, east Cape Town.

"I saw the silhouette of someone...the person was busy attacking, swinging an object at where Rudi was laying," he told the court while exhibiting no emotion in a testimony live-streamed on television.

Van Breda claimed he was using the toilet while also playing games on his phone when he heard the intruders break-in.

Asked if he had killed his parents and brother with an axe, he repeatedly replied "no", saying he had no reason "whatsoever" to murder anyone in his "close-knit" family, whose fortune has been estimated at $16 million.

He said he survived the attack with superficial stab wounds inflicted as he wrestled the attacker who was trying to slit his throat.

The state insists the wounds were self-inflicted.

On why he did not call for help from neighbours during the attack, Van Breda answered "in hindsight, it's something I should have done."

Instead, he first phoned his girlfriend, before looking up the emergency numbers.

In a leaked tape of his call to emergency services, Van Breda could be heard telling an operator that his family members were "bleeding from the head".

He also giggled during the call although in court he denied ever laughing.

Police failed to arrest anyone until Van Breda handed himself in to authorities 18 months after the attack which shocked South Africa.

The family had relocated to Australia many years ago before returning home to South Africa in 2014.