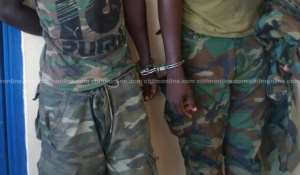 Three soldiers from an Airforce Base in Takoradi, who are members of government’s Operation Vanguard Task-force, the team dispatched to tackle illegal mining, have been arrested by some residents of Tarkwa and handed over to the police for allegedly extorting monies from them.

The soldiers on board a taxicab on Saturday evening, are said to have gone to Aboso, a mining community in the Tarkwa-Nsauem Municipality, and combed around gold buying shops, where they extorted both cash and gold from unsuspecting dealers.

Members of the Aboso community, who were suspicious of the operations of the soldiers, raised an alarm, mobilized and arrested them.

The soldiers were taken to the Aboso Police Station and later handed over to the Tarkwa Divisional Police Command.

Reports from Tarkwa suggests that the suspects admitted the offence upon interrogation by their senior officers from the Operation Vanguard taskforce, which is on a national assignment to help government root out illegal mining also known as galamsey.

A police source told Takoradi-based Empire FM, that the suspects were later handed over to Flying Officer Owusu Williams from the Airforce Base in Takoradi, and currently with the Operation Vanguard in Tarkwa, for the said officer to produce them on Monday for further investigations.

Meanwhile, GHc 900 and two small pieces of gold together with their ID cards have been seized from them.

About Operation Vanguard
The government's resolve to end illegal mining was given further boost with the deployment of the first batch of security men to three regions considered to be the most affected areas.

Dubbed “Operation Vanguard”, the 400 security men made up of personnel of the Ghana Armed Forces (GAF) and the Police Service have been divided into three groups to cover the Ashanti, Eastern and Western regions.

It has so far arrested over 400 suspected illegal miners including some Chinese nationals, and has seized a number of mining equipment.

The equipment includes over 1,500 'chang fa' and water pumping machines.

Twenty-four (24) of those arrested have been convicted by the courts, with some of them sentenced to fines ranging from GH¢1,080.00 to GH¢6,000.00, while others have been jailed – serving between four and 18 months.