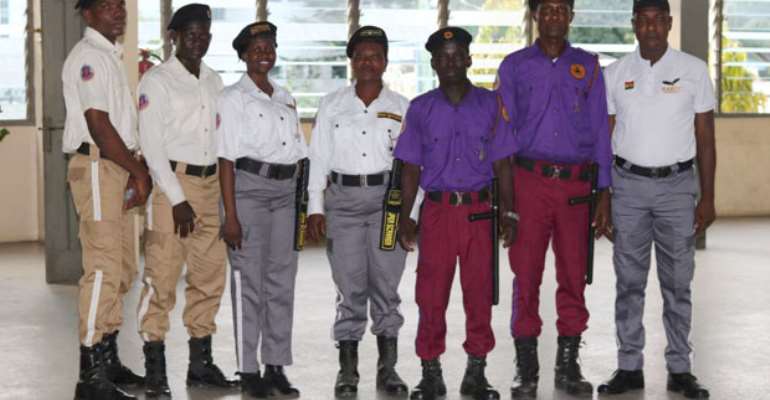 Three sets of uniforms have been outdoored by the police administration to be used by private security organisations operating in the country.

The Inspector General of Police, David Asante Apeatu, who outdoored the uniforms at the police headquarters, said the proliferation of unapproved uniforms being used by some of the private security organisations is a great concern for the service.

“As a result of these violations, there is the likelihood for criminals to take advantage of the situation to engage in various criminal activities such as robbery, stealing and virtually terrorise law-abiding citizens using unapproved weapons, uniforms and other articles,” the IGP stated.

“What this means is that after the outdooring, every new private organisation shall be required to submit these sets of uniforms to the police headquarters for vetting and approval and guards of individual organisation shall be identified by the badge or logo of the respective company boldly embossed in the uniforms,” the IGP added.

He added that they expect strict compliance from all private security organisations because monitoring would be conducted vigorously throughout the country and companies who would default would be brought to book, according to the law.

Adding his voice, the Director General in-charge of Private Security Operations at the police headquarters, DCOP Paul Awini, revealed that they are engaged in a continuous exercise of monitoring the operations of the PSOs.

“To make the operations of the directorate very effective and sustainable nationwide, the police administration has appointed regional private security operations liaison officers who shall be responsible for all private security related activities in their respective regions, working under the direct supervision of their regional commanders,” he observed.

In an address by Chairman of the Association of Private Security Organisations of Ghana, Tony Acquah, stated that issues of uniforms for the private security industry have been a long-standing concern and challenge for two decades.

“The colour combination and style of the uniform of some of the security companies was also an eyesore and, therefore, needed to be standardised for uniformity,” he averred.