Mincing No Words For Mr President! 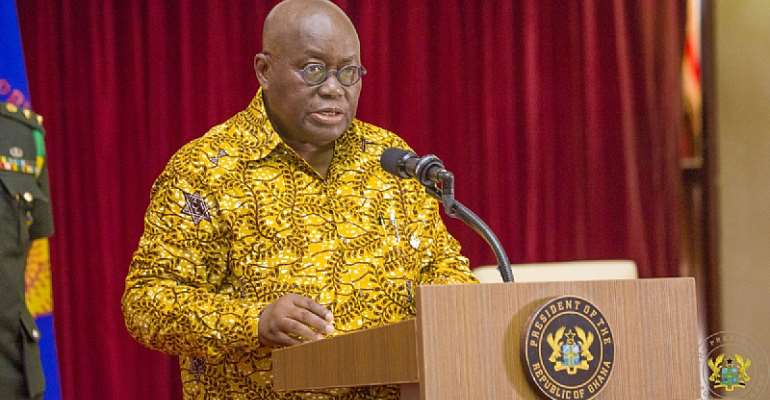 Good Morning, Mr. President! I never thought I would write to you so soon. But the situation has made it necessary for me to write to draw your attention to negative happenings in your government.

Anyway, how is life at the Flagstaff House? I'm sure some of your detractors are yet to come to terms with the fact that a short man like you is now occupying the highest seat of the land. You see, man's ways are not the ways of the Bearded Old Man above.

Without a doubt, your less-than-one-year government has chalked many successes. Notable among them are FREE SHS POLICY and the restoration of allowances to trainee teachers and nurses. The ecstasy that greeted the introduction of these two policies is better seen than described.

Yes, the FREE SHS policy is fraught with teething problems. But I know your competent team is up to the task. For sure, your detractors will sooner than later laugh at the wrong side of their mouth.

I'm, however, saddened to tell you that all the successes chalked by your government so far are being negated by actions of hoodlums and vigilante groups of your party. If it is not “Invincible Forces” unleashing mayhem and attacking a court to free their compatriots, then it is “Kandahar Boys” attacking a Municipal Chief Executive. Indeed, news of pro-NPP groups unleashing mayhem since you assumed power has become one too many. The latest attack, I'm told, was the forceful locking up of some offices of the Karaga District Assembly by youth of your party. I wouldn't be surprised if they are called “Osama Boys”.

Mr. President, you cannot pretend to be oblivious of the nauseating acts by your party youth. Sir, if you did not hear the downpour in the night, did you also not see the wet ground when you woke up the following morning?

It started like teenage pranks and we all thought it would be a passing storm. Some of us even accused your detractors of shouting wolf where there was none. Others even lampooned and accused them of causing “fear and panic”.

But it is gradually becoming clear that the tomfoolery is not a nine-day wonder. We may not know their source of encouragement; but we will not be far from the truth to suggest that they are being emboldened by hidden political hands. It is the reason I add my voice to the voices calling on you to crack the whip, no matter whose ox is gored.

That you are a man who believes in the rule of law is not in doubt. Your patience and tolerance in the face of character assassinations and two presidential election defeats attest to this fact. Such tomfoolery shouldn't be happening under your watch!

It is an open secret that I have sympathies for you and your party. Indeed, I'm one of your ardent admirers and sympathizers. My wish is to see your government succeed. So I will not wait for it to be too late before I open my “konkonsaic” mouth.

Sir, I will not shirk my responsibility of telling you the truth, bitter as it may be. The bitter truth is that your party hoodlums are staining the white calico you have so far woven with your achievements. The bitter truth is that the National Security Minister and those in charge of the country's security have failed woefully. It is more than obvious that they do not deserve the cowries the state is spending on them.

Time and again, we hear you calling on the security agencies to do their work without fear or favour.  That is definitely a good call. But how can they do so when your security capos seem to be giving contrary orders in order to satisfy party folks?

One thing is clear; the situation will not change until people see that you are a president who is not afraid to crack the whip. The continuous disuse of the whip will only allow the vigilantism to fester. And when that happens, you will have no one to blame but yourself. After all, you take the ultimate responsibility for everything happening under your watch, don’t you?

My compatriots and I have watched with admiration how you've managed to remove the bus from the ditch. We also admire how you've so far avoided the pot holes on the road. Your conductor has also conducted himself well so far. It is the reason some of us are livid at the lukewarm attitude of your security capos.

Though the situation is bad, I'm encouraged by the fact that you've not been infected by the dead-goat syndrome. That tells me our cries will not fall on deaf ears.