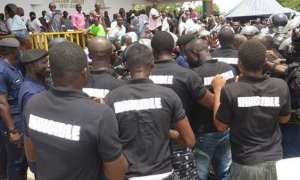 It ought to be pretty obvious by now to every discerning and independent-minded Ghanaian citizen that there is a real possibility that just as Boko Haram did, some of the organised groups of thugs and sundry criminal-types that serve as enforcers for political parties in Ghana, could also eventually evolve into terrorist groups.

If we all agree that it is the private-sector of our national economy that will transfrom our country into a prosperous society, then as a people we must ensure that there is discipline in our nation at all material times, and that those in charge of law enforcement understand clearly that in order to attract investment into the economy, the world must see that on the ground the rule of law actually prevails throughout Ghana, and that all the nation's laws are enforced vigorously without fear or favour by incorruptible security agencies. Period.

The question is: Why, with all the intelligence available to them, which show clearly the threat posed to the stability of our homeland Ghana by the groups of violent and lawless characters associated with the two biggest political parties in Ghana, do the leaderships of the security agencies not demand - through the media - that Parliament passes new legislation under a certificate of urgency, outlawing groups such as the Delta Force, Invincible Forces, Bolga Bulldogs, Khandahar Boys, etc.,etc., and which also makes membership of any such groups affiliated to political parties a serious criminal offence with suitably long mandatory prison sentences if found guilty after prosecution? Haaba.

Above all, has the time not also now come for all the decent men and women people in Ghana's political world - across the spectrum - who actually care about the plight of ordinary Ghanaians, and genuinely seek the well-being of Mother Ghana, to denounce the continued association of political parties in this country with the organised groups of thugs and criminal-types that act as private militias for the main two political parties, the ruling New Patriotic Party (NPP), and the biggest opposition party, the National Democratic Congress (NDC)? Ebeeii.

Finally, Ghana's law enforcement agencies must deal ruthlessly with all the organised groups of thugs and criminal-types associated with the two biggest parties once and for all - before they morphe into terrorist groups and hold us all to ranson: and turn our lives upside down. Enough is enough. Haaba.

The author has 649 publications published on Modern Ghana.