One year on, tensions simmer in neglected Moroccan north

By Fadel Senna with Hamza Mekouar in Rabat 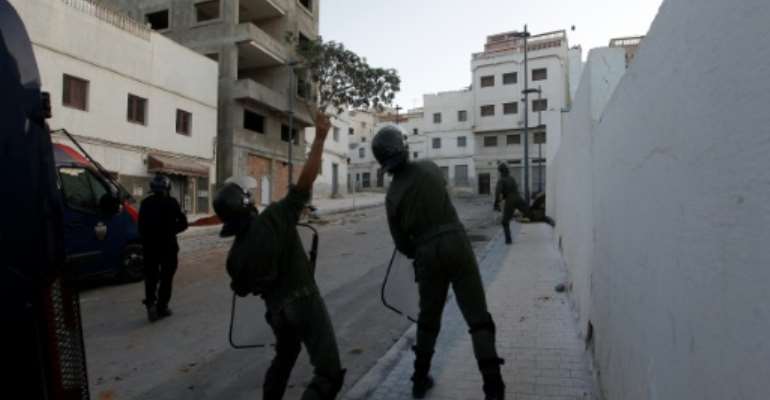 Moroccan security forces take up positions against protestors from the al-Hirak al-Shaabi movement during a demonstration in the northern Moroccan city of al-Hoceima on July 20, 2017. By STR (AFP)

Tensions still simmer in Morocco's neglected north a year after a fishmonger was crushed to death in a rubbish truck, sparking a wave of protests for social justice.

On Saturday, residents of the port city of Al-Hoceima marked the first anniversary of Mouhcine Fikri's death as he tried to retrieve swordfish confiscated by authorities because they were caught out of season.

The 31-year-old's death had sparked demonstrations for justice that quickly snowballed into a wider social movement named Al-Hirak al-Shaabi, or "Popular Movement", calling for jobs, development and an end to graft. 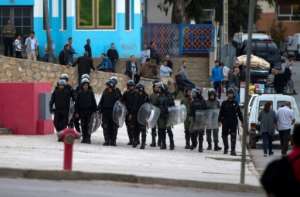 Moroccan police search for protestors from Morocco's al-Hirak al-Shaabi movement as they shout slogans on October 28, 2017 in the troubled northern town of Al Hoceima

Protests gripped the Rif region, particularly the main port city of Al-Hoceima, but also spread to the capital Rabat and economic hub Casablanca.

Hirak leader Nasser Zefzafi, arrested in May, went on trial on Tuesday and faces the death sentence on charges of "undermining the internal security of the state".

He is being tried alongside 30 co-accused who face between 20 and 30 years behind bars.

But even as security forces launched a crackdown on the mainly young protesters, the royal cabinet tried to find ways to contain the damage.

"There was a big delay in launching projects, and worse, the majority of these projects were not even launched," it said.

King Mohammed VI on Tuesday sacked the ministers of education, housing and health because of "delays in development programmes", the palace said.

The Rif has historically had a tense relationship with central authorities in Rabat, and it was at the heart of Morocco's Arab Spring-inspired protests in February 2011.

The Moroccan king relinquished some of his near-absolute control through constitutional reforms following the protests. 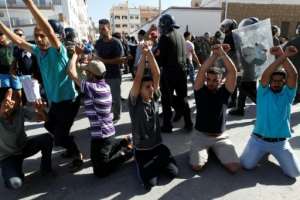 Demonstrators protest for the release of imprisoned members of the al-Hirak al-Shaabi movement in front of Moroccan security forces during a march in defiance of a government ban in the northern Moroccan city of al-Hoceima on July 20, 2017

But the state responded to the Al-Hoceima movement with force, and the city was tense Saturday on the anniversary of Fikri's death.

Security forces imposed a lock-down and made some arrests after skirmishes with residents, an AFP correspondent said.

"They tried to demonstrate but the police prevented them from assembling," a 19-year-old said on condition of anonymity.

A support committee for detained Hirak members had called for peaceful protests to mark Fikri's death.

According to various sources, between 200 and 300 Hirak activists were arrested in the unrest following his death.

Some have been sentenced to several years in jail while others are waiting to face trial.

Authorities banned protests in Al-Hoceima, saying the demonstrators had not "respected the legal process" to hold demonstrations.

On Friday, the official MAP news agency even quoted Fikri's father as saying he "categorically rejects the exploitation of his son's death for suspicious aims".

In the restive city of Al-Hoceima on Saturday, one resident welcomed the king's sacking of ministers, but others said it was not enough.

"Nothing has changed. We need hospitals, jobs and freedom," said a 29-year-old who said he gets by on odd jobs.

However, journalist and researcher Abdellah Tourabi said the ministerial sackings were unprecedented.

"It is the first time this has happened in 18 years" since King Mohammed VI took the throne, he said. "There have been sackings but nothing this big, and those sanctioned are officials who are part of the establishment."

"It is a strong political message," he added.

Morocco expert Pierre Vermeren said however that "changing ministers will not resolve everything".

"There are social demands that are urgent," he said.