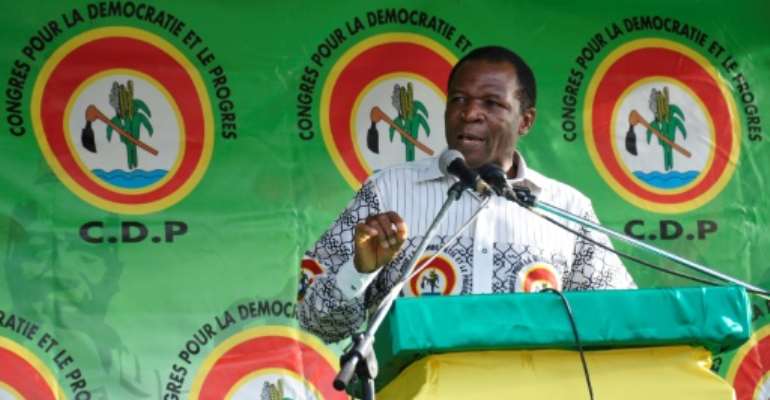 Francois Compaore, pictured in 2012, was detained at France's Charles de Gaulle airport over the killings of journalist Norbert Zongo and three companions. By Ahmed OUOBA (AFP/File)

The exiled brother of Burkina Faso's ousted ex-president Blaise Compaore was arrested at a Paris airport Sunday over the 1998 murder of an investigative journalist that rocked his west African country.

Compaore is wanted in Burkina Faso over the killing of journalist Norbert Zongo and three companions whose charred bodies were found in a burnt-out car in the south of the country in August 1988.

Zongo's family have long accused Francois Compaore -- former adviser to ex-president Blaise Compaore -- of having a hand in the killings which triggered mass protests in Burkina Faso and drew international condemnation.

The crusading editor of L'independant newspaper had written several hard-hitting articles about the misrule of the Compaore regime.

At the time of his death he was looking into the murder of Francois Compaore's chauffeur.

The police have up to 48 hours to question him before bringing him before a prosecutor to face possible extradition proceedings.

Speaking by telephone, BenewendÃ© Sankara, the Zongo family's lawyer, said he was "relieved" by the arrest, saying the Zongo case symbolised "the search for truth and justice of the Burkinabe people".

"He must be extradited to Burkina Faso to face justice," Sankara said, expressing hopes that there would "no legal, diplomatic or political quibbling" in France about returning him to Ouagadougou.

A spokesman for the Balai Citoyen (Citizen Broom) movement which played a key role in the uprising against Compaore also expressed satisfaction over the arrest of the ex-president's brother.

Compaore's lawyer Pierre-Olivier Sur accused Burkina Faso's new rulers of hounding his client out of frustration at not being able to get Blaise Compaore -- who went into exile in Ivory Coast -- into the dock.

"The current government...is changing tack and now going after his brother," he argued.

Compaore was one of the most despised figures in the regime of Blaise Compaore, who was ousted in a popular uprising in 2014 after trying to change the constitution to extend his 27-year hold on power.

Nicknamed the "little president" for his influence over the government, army and business world, Francois Compaore had been seen as a likely successor to his brother.

During the uprising he and his brother fled to neighbouring Ivory Coast, where they were given sanctuary by President Alassane Ouattara.

The fall of the regime paved the way for the long-stalled investigation into Zongo's killing to gain new impetus.

Three former members of the Compaore-era presidential guard were charged over the killings in December 2015 but Francois Compaore had avoided being investigated over the affair until now.

Burkinabe prosecutors had instead been focusing their attentions on Blaise Compaore.

In April, the former president went on trial in absentia over his crackdown on the protests that toppled him.

Thirty-three people were killed in the violence, according to official figures.