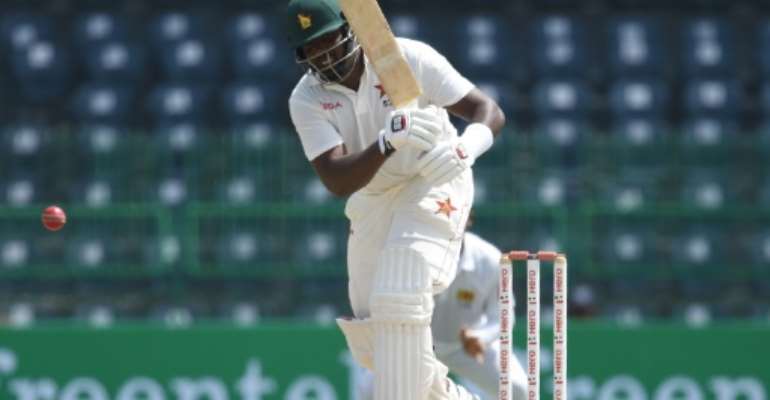 Zimbabwe batsman Hamilton Masakadza went into tea on day one of the second Test against West Indies in Bulawayo on 93. By Ishara S. KODIKARA (AFP/File)

An unbroken century stand between Hamilton Masakadza and Peter Moor allowed Zimbabwe to recover from a rough start to the second Test against the West Indies at Queens Sports Club.

After winning the toss and opting to bat first, Zimbabwe slumped to 14 for three in the first hour before Masakadza and Moor guided them to tea on a more respectable 147 for three.

Masakadza went into the interval on 93, with a fifth Test hundred beckoning, while Moor was unbeaten on a patient 47.

Fast bowlers Kemar Roach and Shannon Gabriel had done the damage up front, with Gabriel having Solomon Mire caught behind in the fourth over of the day.

Key batsmen Craig Ervine and Brendan Taylor departed soon after when they were bowled by Gabriel and Roach respectively.

Gabriel could have had another wicket when opener Masakadza was caught at gully, but replays showed that the fast bowler had overstepped. 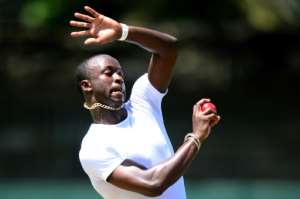 The West Indies lived to regret that no-ball, as Masakadza and Moor navigated the rest of a tricky opening session before adding 91 runs in the afternoon.

Moor was only playing after Zimbabwe went into the game without two important players - fast bowler Kyle Jarvis missed out because of an ankle injury, while allrounder Sean Williams was too ill to take the field.

As a result, Moor came in as a replacement middle-order batsman while left-arm spinner Tendai Chisoro made his Test debut.

The changes left Zimbabwe with just two seamers in their line-up, which made captain Graeme Cremer's victory at the toss all the more important as the hosts look to bounce back from a 117-run defeat in the first Test.

Although Queens Sports Club was overcast and unseasonably cold on Sunday morning, the pitch had significant bare patches on which Zimbabwe's spinners will hope to have success.

The West Indies named an unchanged side from the first Test.