Politics of the Vulture 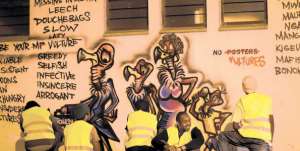 Our political terrain has been characterized by persons whose only 'vocation' and 'profession' is partisan politics. They can not function or survive outside the partisan political domain. When you meet them and ask what job are they doing? Their response usually is, 'I am a Politician' Do we have any institution in Ghana that train people in a vocation called Politicians?

These category of people are most often excessive personality worshippers without any deference to the values and principles of the party they claim they belong to. Their survival is feeding on the egos of political appointees, candidates, and elected officials. They concoct stories, they abuse and insult anyone who critique their gods of supply, and eventually destroy collective party and national interests. They do not even belong to any of the party's structures or offer themselves for party service. They are always hanging around political personalities or taking photos with them to shore up their nonexistence 'bigmanism'. They never see any fault in their gods of supply, they are always deifying and adulating their political gods. They are quick to threaten and insult anyone who critique the conducts of the demigod they have created for survival.

Their thinking is waspy and deliberately myopic. They exude poluting arrogance. So poluting and nauseating to the the extent that, decent people avoid making public statements on critical party or national issues that could have shaped our political and governance discourse and direction.

They steal the nation's resources at the least opportunity. Because they have to grab their portion before the next government comes. To them, politics is purely about survival. Not about service to humanity and transforming the future for succeding generation. In fact, they lack the transformative capacity and deficient in ability.

We must all bear in mind that Ghana's constitution provides the platform for political parties to form national governments through the ballot box. It is therefore imperative to know that, if we do not contribute by strongly expressing our opinions to shape the country's governance, such people will assume offices and unleash behaviours, formulate laws, and policies that will be detrimental to our collective interests.

We are already experiencing some of these behaviours in governments. The future is ours, and developed nations are built on core and deep values, and superior quality of character, expertise, and experienced leadeship.

If we seat on the periphery of politics, Ghana shall harvest the whirlwind