At least 14 dead in Mogadishu attack 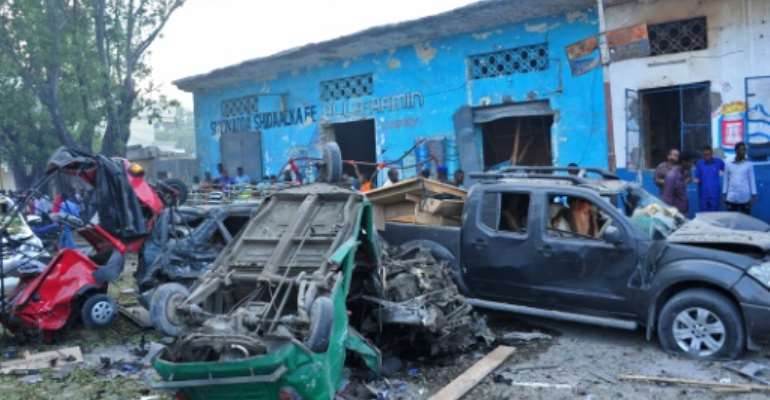 In the attack, a car bomb exploded outside the Nasa Hablod 2 hotel, while a minibus blew up at a junction nearby. By Mohamed ABDIWAHAB (AFP)

At least 14 people were killed in coordinated car bombings followed by an attack on a hotel in the Somali capital Mogadishu on Saturday, claimed by Shabaab Islamists.

Following the blasts, witnesses reported hearing gunfire at the Nasa Hablod Hotel 2 which was sealed off by security forces with gunmen believed to be inside.

"About 14 people, most of them civilians, were confirmed dead so far and the security forces are still working to ensure the area is clear," said security official Mohamed Moalim Adan.

He said "sporadic gunfire" was continuing with at least two gunmen from the Shabaab Islamist group believed to be inside the hotel. One senior police official and a former MP were among the dead.

The attack came two weeks after a massive truck bomb exploded in central Mogadishu, killing at least 358 people, making it the deadliest attack in the troubled country's history.

The Al-Qaeda-affiliated Shabaab claimed Saturday's bombing and hotel assault in a statement on its Andalus radio station.

"The Mujahedeen fighters are inside Nasa Hablod 2 hotel where... apostate officials are staying," said the brief statement.

Police official Ibrahim Mohamed said the attack started when a car bomb went off at the entrance to the hotel while "a minibus loaded with explosives" was detonated at a nearby intersection.

Gunfire inside the hotel

Witnesses then reported hearing shooting from inside the hotel.

"We can hear the gunfire but it is difficult to know who is fighting, the forces cordoned off the building and no one can go close to it," said Abdulahi Nure.

Fellow witness Ismail Muktar said, "We can hear sporadic gunfire and grenade blasts and the area is very dark because the electric line was cut off amid the blast."

"Most people fled the hotel through a back door but some are still trapped inside," said Mohamed Dek, who was escaped the hotel after the initial explosion. 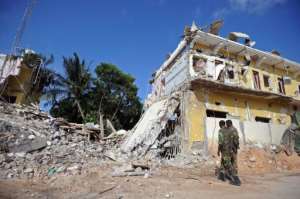 In June 2016, Shebaab militants staged a similar attack on a hotel owned by the same people, with an almost identical name, killing 11 people

The Nasa Hablod 2 is a popular hotel located in the north of the city whose sister hotel, the Nasa Hablod, was hit by Shabaab militants in June 2016, in an attack that killed 11 people, including a junior minister.

The Shabaab has made attacks on hotels -- commonly beginning with a suicide car bombing followed by an invasion by gunmen -- a regular strategy in its decade old battle to overthrow successive internationally-backed governments in Mogadishu.

The Shabaab lost their foothold in Mogadishu in 2011 but have continued their fight, launching regular attacks on military, government and civilian targets in the capital and elsewhere.