No Compromise, The Law Is Supreme At All Times---Nana Addo 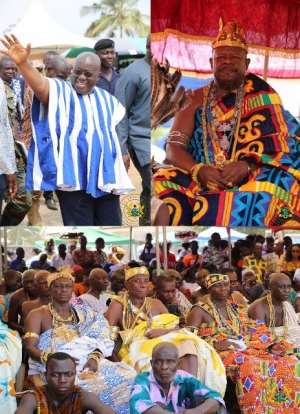 President Nana Addo Dankwa Akufo-Addo on Friday urged the law enforcement agencies to ensure at all times the supremacy of the law for the cohesion, peace and security of Ghana to consolidate of the gains of its democracy.

Thus, they should ensure that everyone in Ghana respects the law, by enforcing it (law) without fear or favour, without recourse to the political, religious or ethnic consideration, for justice and equity to prevail in the nation.

President Akufo-Addo made the call when he addressed the chiefs and people of Manya Krobo during this year's Ngmayem festival, a celebration of the abundant harvest of ngma (millet).

The period is one of gratitude and thanksgiving, when the Krobo people acknowledge God's providence in the previous years and supplicate for his continuous bounty and protection in the coming years.

The President who reiterated governments' commitment towards maintaining security of the country, stressed that, 'the application of the laws of our land will occur, in the words of the judicial oath, without fear or favour, affection or ill will, and without recourse to political, religious or ethnic affiliations of any citizen of the land.'

'When you fall foul of the law, you will be dealt with accordingly, and the law enforcement agencies, including the judiciary, must ensure this is done,' he said in reproach of reported disturbances by alleged members and supporters of the New Patriotic Party (NPP) IN AGA AND Sissala West in the Upper West Region

President Akufo-Addo told the gathering that Ghana had the unique potential to feed her growing population, meet the raw material requirements of her processing industries, achieve food security, and compete successfully as a leading supplier to countries around her and beyond.

He said through governments flagship programme,' Planting for Food and Jobs', 'we have ensured the provision of improved seeds, the supply of subsidised fertilizers, the provision of dedicated extension services, a marketing strategy and the use of e-Agriculture. Under this Programme, 227.8 hectares of land were cultivated in the major season, and 179.8 hectares for the minor season in Manya Krobo.'

Optimistic of a bumper harvest this year, the President said the National Buffer Stock Company Limited had been resourced to provide ready market for farm produce.

'This will ensure that our farmers are paid minimum guaranteed prices, to make farming a viable venture. Agriculture remains the fuel that powers all our activity in Ghana. We ignore it at our risk,' he said.

'My government will, certainly, not ignore it. I give you my pledge that farmers, food crop farmers, fish farmers and livestock farmers will all have the support and respect they deserve from my government', he added.

The President noted that his government, over the past ten months, had been working to grow Ghana's economy and open up opportunities for the people, starting with the Free Senior High School programme that would guarantee education for all of Ghana's children, and the fixing of the ailing national Health Insurance scheme.

His administration, he said, had also eliminated a number of taxes that hitherto stifled private sector growth, and introduced a raft of policies that would formalise the structure of the Ghanaian economy

Outlining some of the policies of his administration over the last 10 months, President AKufo-Addo noted that his government has been working to grow Ghana's economy and open up opportunities for all her citizens.

His government, he said, has started the Free Senior High School programme, guaranteeing secondary education for all of Ghana's children; and is heralding the revival of the National Health Insurance Scheme (NHIS).

Government, the President added, has also abolished a number of nuisance taxes which were stifling the growth of the private sector, and introduced a number of policies aimed at formalising the structure of the Ghanaian economy including; the National Identification Scheme; the National Digital Property Addressing System; the e-registration system to enhance business registration processes; the paperless system at the port, amongst many other initiatives.

President Akufo-Addo admonished the Chiefs and people of Krobo to bury their differences and unite to lift the fortunes of the area.

He reminded them that the full gains of the policies and programmes and projects being implemented by his government could only be realised 'when there is total peace and security in Krobo, and when Chiefs put aside their differences to provide leadership.'

'Manya Krobo has had its fair share of disputes, with some still unresolved, and I suggest it is time we brought them, and indeed all other disputes across the country, to an end.'

The President noted that the entire Krobo area has the potential of being developed into a major transportation corridor, linking the seaport of Tema to the Upper West, Upper East and Northern Regions, and the country's landlocked neighbours through the Volta Lake.

'Work has started and is progressing steadily on the Tema to Akosombo railway line, which will result in the construction of a containerised port at Akosombo.

From there, shipment will be via the lake, and then by rail to Burkina Faso, and beyond. These projects have the potential of creating jobs and wealth for the people of Krobo,' the President added.