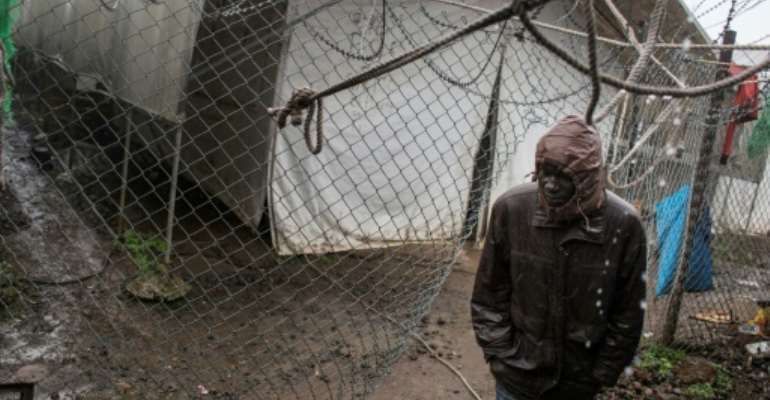 A rebel "general" from South Sudan, Dhiling Keah, briefly sums up the strategic position of his army, eking out an existence in eastern Democratic Republic of Congo.

"We are confined," he says.

In July 2016, his soldiers were fighting with former vice president Riek Machar in Juba, capital of the world's newest state, against the forces of President Sala Kiir.

Beaten, the rebels retreated over the border into the northeast of the DRC.

They trudged hundreds of kilometres (miles), ending up in a camp some distance from Goma, capital of the strife-prone North Kivu province.

Today, Keah, 37, exercises authority over a lost army of several hundred rebels who have been disarmed and lost their purpose.

The general is held to be a cousin of Riek Machar, one of the most prominent figures in South Sudan, which became independent in 2011.

The former fighters are fed and clothed by MONUSCO, the UN mission in the DRC, in their camp at Munigi.

It sits on high ground overlooking Lake Kivu about 10 kilometres (six miles) from the lakeside city of Goma.

Seated on a mound behind the gates, a dozen South Sudanese huddled in anoraks and jackets watched vehicles drive past on their way to the Nyiragongo volcano and the Virunga national park famed for its mountain gorillas, and even the Masisi and Rutshuru territories, both home to feared local armed groups.

Other rebels kill time as best they can with football matches, card games, dominoes and a tiny space to watch television in a shipping container.

In all, more than 400 South Sudanese live in about 30 large tents, including civilians and youngsters as well as ex-combatants. Most, like Machar, are from the Nuer tribe, which fell into conflict with the Dinka people in 2013, after a long war to win freedom and statehood from Arab-dominated Sudan.

About 70 percent of the community are Christians, who have their church under canvas, while a second church serves followers of the 19th-century Nuer prophet Ngundeng Bong.

In a tent that he shares with half a dozen of his comrades, Keah placed chairs at the feet of the camp beds to receive the first team of journalists he has authorised to visit the camp.

The rebel leader described a hellish exodus from South Sudan with Riek Machar and his men, who endured great heat and pounding rain, bombing, sickness and a shortage of water and food.

More than 70 men never made it to the haven in the DRC, while the survivors were rescued in extremis by troops of the MONUSCO mission. Riek Machar is said to have been half-dead when he was found.

While Riek Machar headed on to South Africa, his brothers-in-arms were transferred to Goma by MONUSCO, which has been accused by expert observers of acting alone outside international law.

The arrival of the South Sudanese aroused fear and hostility in the city of about a million people, some of them traumatised by memories of Hutu refugees coming across the border from Rwanda with the shockwave of the 1994 genocide in the small next-door nation.

Hutus held responsible for massacring 800,000 people were among those who fled a mainly Tutsi rebel army and combatants remained active in the former Zaire.

Two decades on, the deputy chief of the UN mission in the DRC, David Gressly, said the South Sudanese had been asked to stay within limits in exchange for humanitarian assistance.

"We describe it as a voluntary liberty restriction," he said.

"They agree they are disarmed and demobilised," added the UN official, who previously served in South Sudan. 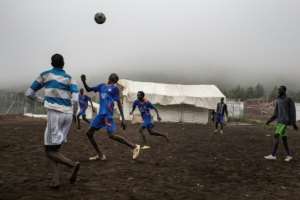 The former fighters while away their time playing football, dominoes and cards -- they also have a space in a shipping container where they watch TV

"We haven't had weapons for a year," says Keah. "We're ready for civilian life."

An innate politician who weighs his words, the general expresses gratitude to the United Nations for saving the lives of his men, feeding them and protecting them.

But he feels that this situation cannot last, a few days before the UN ambassador to the United Nations Nikki Haley visits the DRC and South Sudan, whose independence struggle found firm support in Washington. 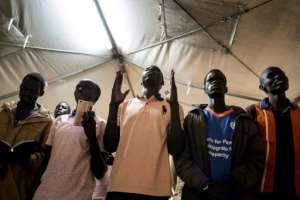 Power of prayer: The rebels have set up two tents for religious observance

Signs of discontent are growing in the camp, of lack of space -- the camp measures about 500 metres (yards) long by 200 metres wide, and variety in food, as well as the isolation.

Deprived of freedom without being prisoners and living in a UN camp without refugee status, men of the lost army are asking to be transferred to other countries where they might find loved ones, such as Uganda, Ethiopia, Kenya, Sudan or even a refugee camp on the DRC-South Sudan border.

Several hundred people have been able to leave the camp because they had valid travel papers.

But their leader and most of the men live in a legal limbo, as the days, weeks and months pass by.

Election 2020: Only Uniform Personnel Will Be Deployed – Gha...
58 minutes ago