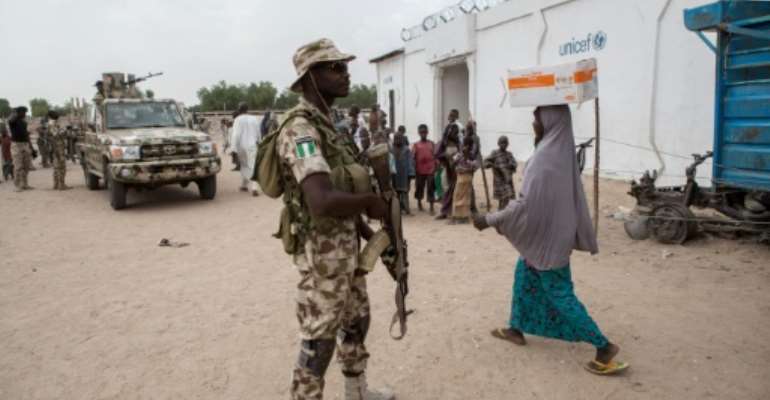 There has been a spate of attacks against the military since the end of the rainy season in September. By FLORIAN PLAUCHEUR (AFP)

At least eight soldiers were killed in heavy fighting when Boko Haram raided a military camp and looted food from villagers in northeast Nigeria, a military source disclosed on Thursday.

The attack in Sasawa village, some 45 kilometres (28 miles) from the Yobe state capital, Damaturu, happened at about 5:00 pm (1600 GMT) on Tuesday.

It was the third Boko Haram attack on the military in the remote region in the last two weeks, after a relative lull during the rainy season, which ended last month.

The spokesman for 3 Division Nigerian Army in Damaturu, Colonel Kayode Ogunsanya, on Wednesday confirmed the attack, saying only that there were "casualties on both sides".

But a military commander in the city said the death toll had risen.

"So far we lost eight men in the Boko Haram terrorist attack on the 233 Battalion in Sasawa village: seven soldiers and the field officer," he told AFP on condition of anonymity.

"Their bodies have been recovered. But many others are still missing. It is not clear whether they are dead or alive."

Boko Haram attacks on military bases were a frequent tactic as the group gained in size and strength, using the weapons and ammunition seized to capture swathes of territory.

But such attacks and hit-and-run raids on remote villages reduced drastically after 2014, as a military counter-offensive was launched.

The government in Abuja maintains the fight-back has left the jihadists a spent force.

Yet sporadic strikes -- and suicide bombings against civilian "soft" targets such as mosques and camps for the displaced -- indicate the group remains a threat.

A local chief in the Sasawa area said the jihadists arrived in six pickup trucks and stormed the military encampment, triggering a gunfight that lasted for six hours.

"When the gunmen realised they would be subdued, they sent for reinforcements and more fighters arrived in three trucks," he said, asking to remain anonymous for fear of reprisals.

They overran the base, forcing the soldiers to withdraw. Rebel fighters then moved into the village, which had been deserted by residents to escape the fighting.

He added: "They (Boko Haram) loaded grains from the recent harvest into the pick-up trucks and moved towards Kareto and Magumeri in neighbouring Borno state."

Crops that had been left out to dry on farms outside nearby Tungushe village were set on fire, he said.

At least 20,000 people have been killed and made more than 2.6 million homeless since the Islamist insurgency began in 2009.

In February the jihadists attacked the same military base in Sasawa, killing two civilians.

In August, two livestock traders were killed and three others were seriously wounded after they triggered a landmine as they fled a Boko Haram ambush.

Last Sunday, 14 people were killed in a triple bomb attack near a camp for the displaced in the Borno state capital, Maiduguri.

On October 18, at least three soldiers were killed when Boko Haram fighters ambushed a military convoy near the Borno town of Damboa.

On October 13, one soldier was killed and nine others were wounded in an attack on a military base in the town of Marte, near the shores of Lake Chad.

Fighters loyal to the factional leader Abu Mus'ab al-Barnawi are known to operate in the Magumeri area north of Maiduguri and are believed responsible for a deadly ambush in July.

The attack on a heavily armed convoy of oil exploration workers killed 69 people, including 19 soldiers and 33 militia members, while three were kidnapped.