Let's Work Together To Bring Development To Tolong District - DCE 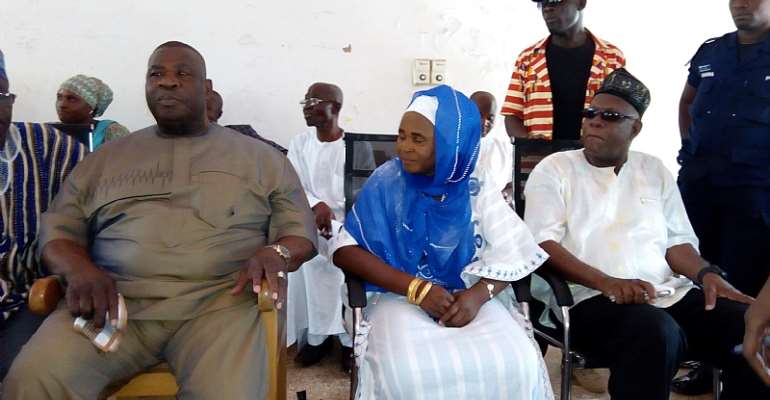 The newly sworn in District Chief Executive (DCE) for the Tolong District of the northern region, Hajia Barikisu Yakubu has appealed to the members of the New Patriotic Party in the area especially, her opponents for a United Front to be able to bring the needed development to the people.

The Tolong District on Wednesday sworn into office it's District Chief Executive (DCE) after several attempts to get the District a leader by the NPP government failed.

The District, for over six months has lived without a DCE since the Nana Addo led government took over the mantly of leadership of the country after the chiefs and people of the area hevemently rejected one Hajia Amaama who was appointed by president.

Until the appointment of Hajia Barikisu Yakubu, the deputy northern regional minister Solomon Boar acted as the DCE for the area which was a major concern to the people.

But the District Assembly on Wednesday October 25,2017 gave Hajia Barikisu Yakubu, who was recently nominate by the president to represent his government in the area so that the people can also benefit from the many developmental and social intervention programs the party want to offer to the people of Ghana 71.1 percent confirmation.

Minutes after taking her oath, Hajia Barikisu asked for unity and support from the people in the area

especially, members of the NPP party.
According to her, the area can only benefit from the transformational agenda of the NPP government is offering Ghanaians when there unity among them.

She mentioned lack of potable drinking water, access roads, inadequate schools and poverty as some of the challenges facing the area.

She expressed her gratitude to the president and the regional executives of the party for the confidence they have in her hence choosing her to represent the government and the party in Tolong.

The Northern regional minister, Salifu Saeed who sworn Hajia Barikisu Yakubu into her office appealed to the constituency executives especially, those who showed up to also contest for the position to burry their differences for the benefit of the party and the people at large..

Honorable Saeed also pledged the support of the Regional Coordinating Council to the development of the Tolong and the region as a whole.

On his part, the Regent of Tolong, Major Suleimana Yakubu said he was happy that, the area has gotten someone who will act as a leader in the development of the area.