For Ethiopian rights advocate, not seeing is no obstacle 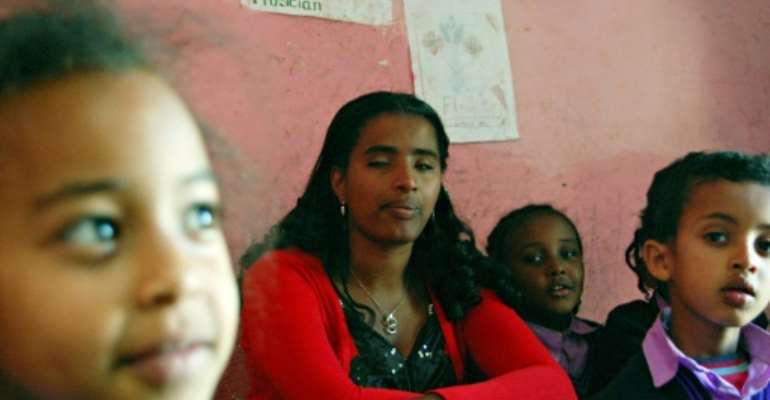 Ethiopian rights activist Yetnebersh Nigussie's tireless efforts to work for the country's millions of disabled have been recognised with the Right Livelihood Award. By AARON MAASCHO (AFP/File)

Yetnebersh Nigussie's first battle for disability rights was in law school, when she successfully pushed university administrators to provide Braille textbooks for blind students such as herself.

Not long after, Yetnebersh, 35, left the legal profession to pursue a different type of advocacy as a full-time fighter for the rights and opportunities of Ethiopia's millions of disabled people.

But her work is not yet complete.

"There are still... millions of persons with disabilities who are living in a very destitute manner in a very undignified way," Yetnebersh told AFP.

"We really need to show people that people with disabilities have one disability, but have 99 abilities."

The award, founded by Swedish-German philatelist Jakob von Uexkull in 1980, is meant "to honour and support those offering practical and exemplary answers to the most urgent challenges facing us today," according to the Right Livelihood Award Foundation.

Cited "for her inspiring work promoting the rights and inclusion of people with disabilities," Yetnebersh said she sees the prize as a way to amplify her message that disabled people must be treated as equals.

"It's one step forward in recognising that disability is not about charity, but equality. It's about human rights and justice," she said.

A 2011 joint report by the World Bank and World Health Organization estimated there are 15 million disabled Ethiopians, almost one in five people.

Most face grim prospects in a country that is among Africa's poorest and where many see being disabled as a curse.

"No one recognizes that abled bodies could be disabled tomorrow because of an accident or so on. People do not understand that," said Nemera Woyessa, country representative of Light for the World, a disability rights group that Yetnebersh works with.

In cities like the capital Addis Ababa, disabled people wait at intersections and along sidewalks seeking handouts, a practice so commonplace that it raises few eyebrows.

"Begging takes away your dignity," Yetnebersh said. "It leaves your life in the hands of others."

Before she came on the scene, charities serving the disabled tended only to work with people with certain disabilities, an approach Yetnebersh feels only increased inequality.

Yetnebersh, who lost her eyesight to a meningitis infection at five years old, attended a Catholic school for the blind and excelled as a student, leading the student council as a high schooler and founding a female student's association at her university.

In 2005, she started the Ethiopian Centre for Disability and Development (ECDD) with the aim of tackling issues affecting the disabled in her own way.

Since then, she's worked to get the government to adopt a building code that requires the many new constructions springing up around Ethiopia to accommodate the disabled with things like wider doorways and Braille instruction panels.

She's also published a guide listing how accessible hotels, restaurants and government offices in the capital are to the disabled.

Her persistent lobbying has gotten results, said Nemera, and now "every government has to look within the lens of disability," when planning projects and policy.

Getting disabled Ethiopians away from a life of begging remains among Yetnebersh's top priorities.

ECDD has worked with more than 120 groups of disabled entrepreneurs across Ethiopia to determine what kinds of businesses they are capable of running, and helped them become everything from dairy farmers to carpet makers.

Yetnebersh is not sure what she will do with her share of the three-million-kronor ($373,000; 315,000-euro) prize that she splits with two other winners.

But she says she's already benefited from the award thanks to the platform it has given her.

"Inequality of any kind is a threat for equality of all humankind," she said. "That's the message I want to send."