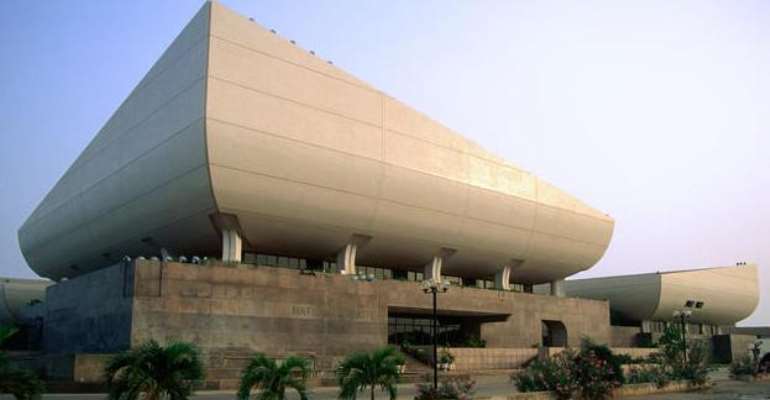 Imagine that you pay to see a concert at the National Theatre; the show begins, the excitement heightens but you are literally burnt in sweat because the air conditioners at the auditorium are faulty.

Last Saturday at Becca's anniversary concert, patrons had to endure strong heat at the National Theatre, a situation that has persisted for a long time.

Some of these people including entertainment maven Nana Poku Ashis took to Facebook to register his discomfort.

“The management of the national theatre must not rent out their facility out to no ph**ing persons until they fix the bloody accommodation…. Whaaaaaaaaat heat be what…eiii this is craaaasszy. This is a disgrace to the creative art ministry and industry…. Some lazy funny a** nigg*z must lose their jobs…. Xylofon media please bless us with an auditorium ok e no hard for you guys koraaa.. humble appeal duh,” he wrote. 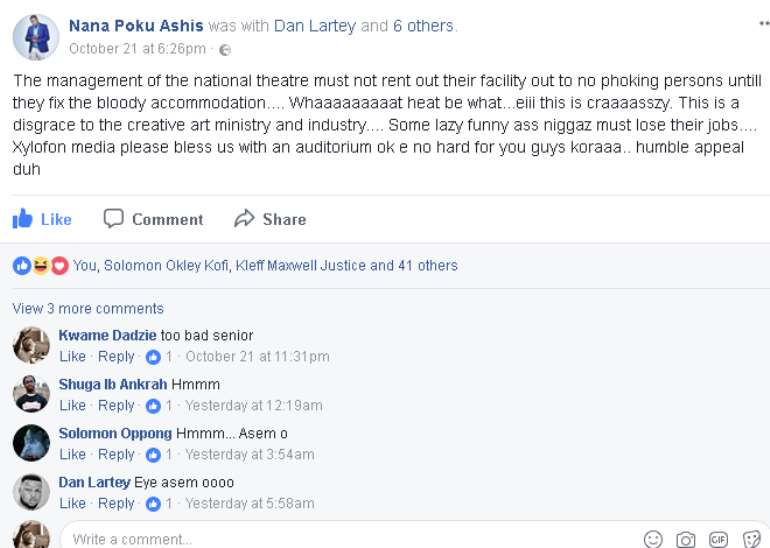 Christian Agyei Frimpong, a presenter at Onua FM also wrote on Facebook: “Mama Amy Frimpong, CEO of National Theatre, You have not been able to fix the air-conditioning system at the theater as you promised? The place is very hot what.” 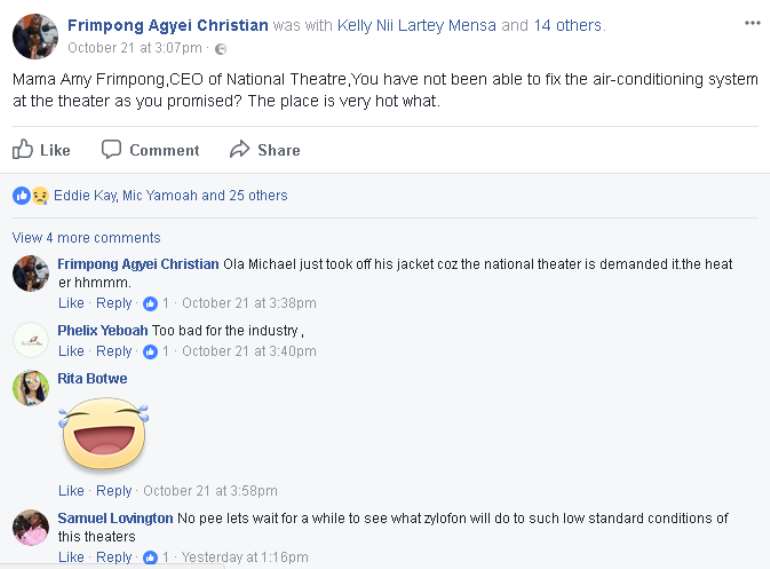 That is not all!
At the MTN Heroes of Change held on 18th May, 2017 at the National Theatre, Nana Kwame Ampadu, in a freestyle composition also pleaded on the authorities to repair the AC because of the unbearable heat in the room.

While doing the freestyle of a song he composed on the night titled 'Te W'anim,' he sang in these words: “you are here enjoying the show but see how you are fanning yourself due to heat. Tell the authorities responsible to fix the air cons.” 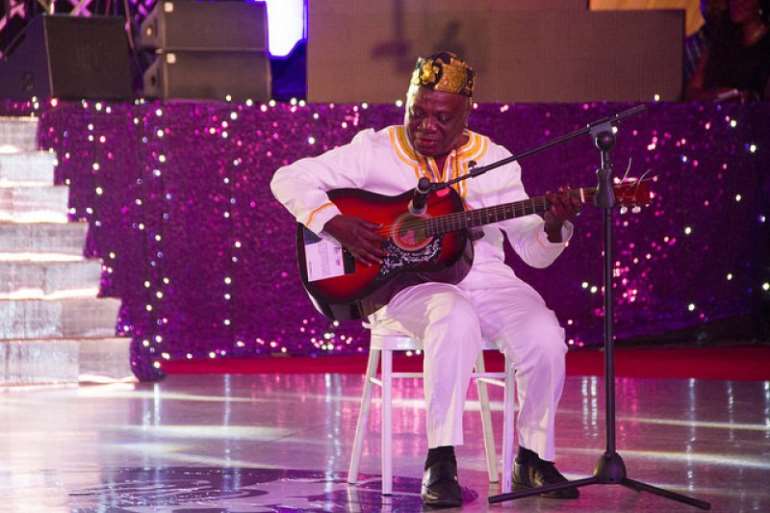 The National Theatre is supposed to be the major event centre for arts and entertainment activities in the country. Yet, it is not in the best of shape to be considered a national theatre.

She said the air conditioners were functioning just that they were slower in capacity than they were when originally installed. According to her when the air-cons were renovated they were fixed to a capacity of about 75%.

“We've talked about this for a couple of months now and it's the same issue. When the air-conditioning system was replaced, they put it lower capacity air conditioners. So it's not like it's not functioning – it works. On Saturday it was working,” she said. 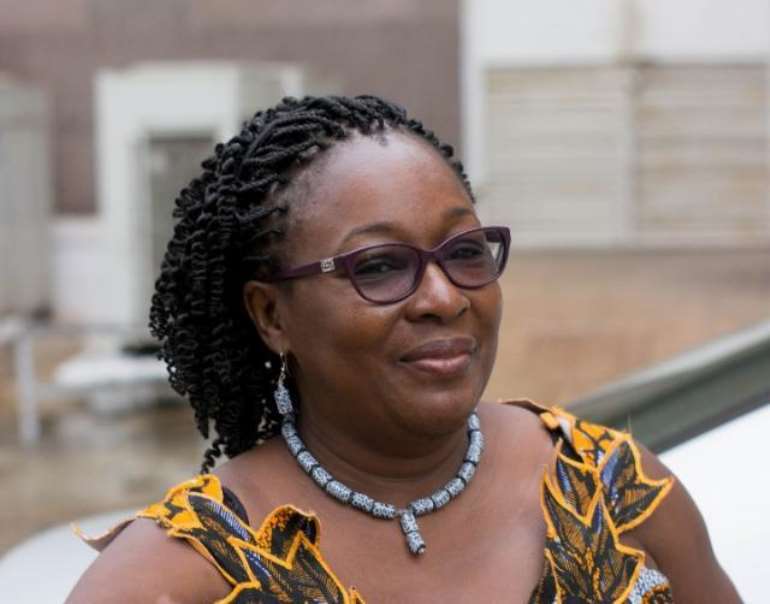 When asked whose responsibility it was to fix the air-conditioners, Amy said “we have to do it.” She added that they were working on it even though it is not a situation that can easily be fixed.

“We started a process last year, gone through a procurement process by doing an energy audit of all the electrical gadgets but it is not a problem that is fixed easily. We are on I and hope to get it repaired or replenished,” she told Citi Showbiz.

Unfortunately, she was not able to give me any timeline as to when these faulty air conditioners would be restored.

The National Theatre boss was waxed evasive
Sometimes, it is very difficult to criticize powers that employed you so I understand why the Director of the National Theatre, Amy Frimpong could not to blame the government for not expediting the fixing or replacement of the broken air-conditioners at the theatre.

My research shows that the theatre is not financially capable of conducting any maintenance works on the facility. 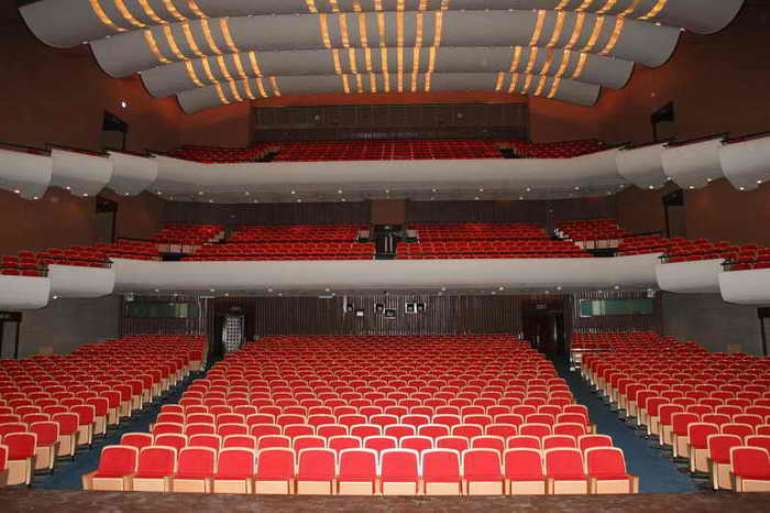 It is a crying shame that as a people, we still patronise such poor facility owned by the government. People from other countries come to taste the bad state of the theatre and it dents our image as a people.

If we won't get an ultra-modern theatre to host our programmes, at least we must enjoy some comfort while we hold our events in this small one.

The National Theatre must be boycotted by event planners and organisers forthwith. When that happens the government and the right authorities will show more concern by putting it in good shape for use.

One region, one theatre
The government promised in its manifesto that it would provide every region (apart from Greater Accra) with an ultra-modern theatre. That is a good idea but with this poor maintenance culture, I wonder how we would be able to handle the new theatres that are yet to be built.

It is about time private individuals also got hugely involved in the showbiz and entertainment business and by extension built entertainment centres for the industry. Government will do its bit, but it can't solve all our problems.

I hear Zylofon Media is building a performance theatre at East Legon in Accra and I trust that it will be of a great help to the arts and entertainment industry.

It has a building area of 11,896 square metres (128,050 square feet), and is sited near the junction of the Independence Avenue and Liberia Road. The building has a complicated construction moulding and novel exterior features. When looked at from a distance, the whole structure looks like a gigantic ship or a seagull spreading its wings.

Conclusion
We can't risk suffocating in that 'oven.' The air-cons must be replaced or the theatre be closed down.