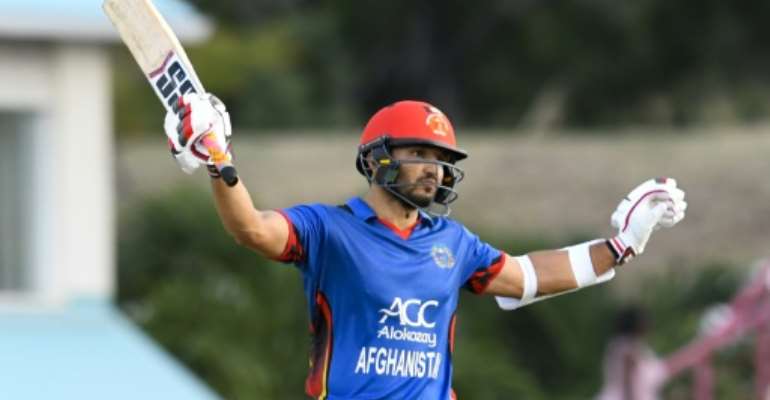 Gulbadin Naib of Afghanistan celebrates his half century during the second ODI against the West Indies at Darren Sammy National Cricket Stadium in Gros Islet, St. Lucia, June 11, 2017. By Randy BROOKS (AFP/File)

Sharjah (United Arab Emirates) (AFP) - Afghanistan will play three one-day internationals against Ireland in Sharjah in December while they also eye their inaugural Test against Zimbabwe, an official said Sunday.

"We are hosting a three-match ODI series between Afghanistan and Ireland in December and there are also discussions on Afghanistan playing their inaugural Test at our ground after the ODI series," Mazhar Khan, GM Sharjah cricket stadium, told AFP.

Both Ireland and Afghanistan were accorded with Test staus earlier this year to become the 11th and 12th Test nations.

While Ireland have scheduled their inaugural Test with Pakistan at home in May, Afghanistan are hoping to play their first Test against Zimbabwe.

"We are ready to host Afghanistan's first Test and for that dates will be finalised soon," said Khan.

Sharjah has hosted the most one-day internationals with 228. They will host the fifth and final one-day against Sri Lanka on Monday.