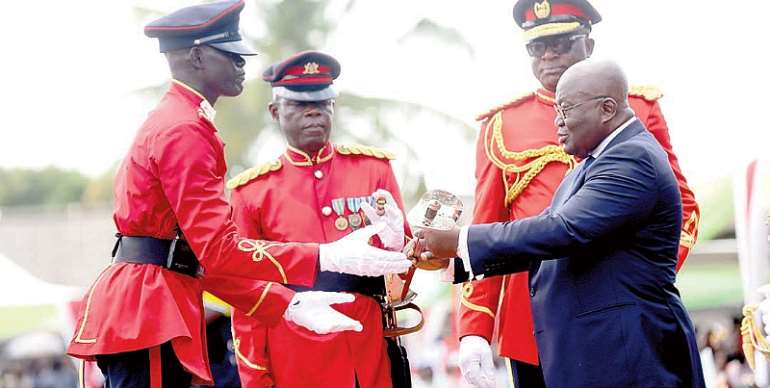 President Akufo-Addo reviewed the graduation parade of the Cadet Corps of the Ghana Armed Forces (GAF) at the Military Academy Training School (MATS) at Teshie in Accra yesterday.

It was the first time he was doing this after becoming president on January 7, 2017.

The parade, which featured cadets from the Regular Career Course 57 and Short Service Commission/Special Duty Course 55, had four foreign officers – two each from Benin and Guinea.

In all, 106 cadet officers from Ghana, Benin and Guinea graduated.

Warning
The Commander in-Chief of the Ghana Armed Forces gave a note of caution to his men.

“Remember, you are to safeguard and protect the territorial integrity of the nation and its citizens, and not to use your position to antagonise the very citizens whose sacrifices have made your training possible,” he said.

He stressed the need for the soldiers to remain conscious of their responsibilities towards the people of the nation, whose security they had been charged to protect.

“As you enjoy the euphoria that surrounds your achievements on this memorable occasion, do not forget that a responsibility has been thrust on your shoulders. Your commission into the Armed Forces is the beginning of your careers as professional officers and leaders, and you are expected to exhibit exemplary conduct. You must at all times discharge your duties professionally and diligently,” he charged the Cadet Corps.

Charge
President Akufo-Addo pointed out that “you owe it a duty to the nation to work towards ensuring its peace, stability and development.”

Living in a constitutional democracy, which has taken the blood and sacrifices of several generations of Ghanaian patriots to establish, the president posited, “It has become the standard bearer and beacon of democratic engagement on the African continent, receiving worldwide acclaim for its progress.”

“All of us – political leaders, religious leaders, civil society leaders, military leaders – are first and foremost citizens of this democratic state, and our first and paramount duty is to uphold the teachings of its Constitution.”

Besides being equipped with the fundamentals of functional leadership, the president noted that the cadet officers had also been imbued with the requisite military skills and other relevant areas of military studies, upon which they are required to build their future careers.

Advice
He revealed that “as young officers, you must be desirous of acquiring more knowledge, so you are not overtaken by the changing tides in this fast-paced technological era. The sky must be your limit in your quest for information and knowledge.”

He also had cause to remind them that they were being commissioned into the Armed Forces, which has carved a niche for itself over the years, as a unique, disciplined and professional entity, nationally and internationally, in the discharge of its duties.