I Have More Facts On Sacked CID Boss --- Ken Insists 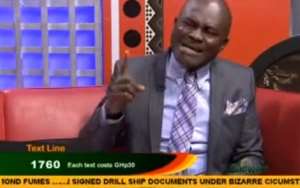 He said the allegations were not made in a vacuum insisting that there are grounded evidence to the effect that the police chief was fueling the activities of land guards who were allegedly terrorizing residents and seizing their legally acquired lands in the country.

“I have evidence to back whatever I am saying that he was dealing with land guards. His sack is long overdue. If I show you the documents I have about his dealings in this respect, you will be marveled”, he disclosed on Oman Fm’s Boiling Point.

The former CID Boss has hinted of a legal action against Mr Kennedy Agyapong, whose allegations he claims have tainted his 29-years of unblemished service to the nation.

Mr Oduro who was due to retire on January 3, 2018, was a week ago ordered to proceed on leave following what he said was consistent attacks on him by the MP who claimed he [Oduro] was associated with land guards.

But the NPP firebrand who says he is not deterred by legal threats disclosed that his decision to go to court will only open up the pandora’s box as more revelations await him.

“Today I want to tell Bright Oduro that there was an investigation before he was asked to proceed on leave. The young police officers whose lives were in danger approached me and told me that if my party will be able to protect them and be able to deal with the land guard menace in Accra then we should come to East Legon police station and demand for the docket of all the land cases and we will see those behind,” he said.